“Lights for Rights” – in solidarity with Women’s Marches 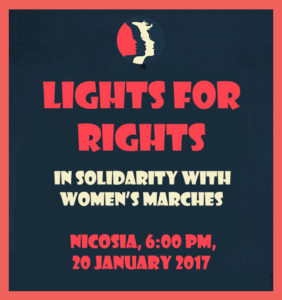 We, the undersigned organisations, call on women’s organisations, other organised groups and individuals to join us in the “Lights for Rights” event, at 6:00 pm on Friday, 20 January 2017, outside the American embassy in Nicosia.

The event, which puts Cyprus on the map of the international day of action, is being organised in solidarity with the Women’s Marches in Washington D.C., other cities of the USA and the thousands of other such events all throughout the world, for fundamental rights, including women’s and migrants’ rights, for social justice and equality.

On 21 January 21 2017, the first day of Donald Trump’s presidency, women-led marches, welcoming all participants, will take place across the world, with the largest expected in Washington D.C..

We will gather together for the protection of our fundamental rights and the safeguard of our freedoms threatened by recent and ongoing political developments and events, concerns and fears at national and international level. We will raise our voices for dignity and equality of all people – women, men and LGBTQIA persons, migrants and refugees – of all statuses, people with disabilities, young and old, of all faiths and beliefs, of the impoverished as a result of the world economic crisis – for the security and health of our planet and for strengthening diversity.

This is an all-INCLUSIVE event and everyone who supports its goals is welcome! 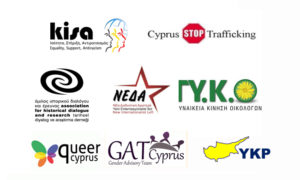