KISA calls on the Interior Ministry to immediately visit the strikers in Menoyia. 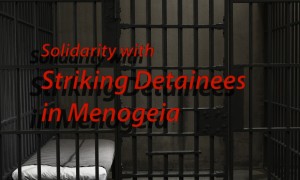 On Tuesday, 15 September, a delegation from KISA visited the Detention Center of Undocumented Migrants in Menoyia and talked with detainees, 42 of whom have been on hunger strike since 9 September. Beyond the hunger strikers’ basic demand to be set free, at this point they see an urgent need to begin direct communication with the Ministry of Interior or the Civil Registry and Migration Department (CRMD) in order to facilitate their claims. It should be noted that according to the strikers, they have not been visited by any Interior Ministry official despite reaching their eigth day of hunger strike.

The findings of KISA’s delegation to Menoyia confirms the conclusion that the policy being followed by CRMD goes against the spirit of the European Union’s Return Directive (2008/115/EC) and the applicable national legislation. The spirit of the Directive implies that detention must be considered as a measure of last resort which should be applied only in the absence of any alternative measure, and provided the state is ready to promptly implement measures for the deportation of the individual for whom the decree is issued. Notwithstanding the above, the following are still being detained illegally in Menoyia:

Regarding conditions in the Detention Center, the detainees expressed complaints about the quantity and quality of the food that is being provided to them. Furthemore, they expressed complaints about the response they receive regarding medical issues. More specifically, detainees complain of the fact that when they are taken to hospital for examinations, the doctors only inform the guards of their diagnosis while no relevant information is given to the detainees themselves regarding the state of their health.

Following on from these observations, KISA – Action for Equality, Support and Antiracism requests: