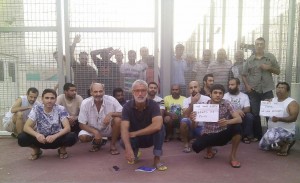 It is the 6th day of an ongoing hunger strike for 42 detainees in the detention center for undocumented migrants in Menogeia. In protest against their arbitrary and prolonged detention, the strikers refuse to accept food and they ask from the competent authorities the immediate review of their cases. It should be noted that so far seven people have been carried to the hospital in Larnaca after health complications and after receiving the necessary care, the authorities transferred them back to the detention center.

KISA, Action for Equality, Support, Antiracism ascertains that the policy followed by deputy director of the Civil Registry and Migration Department regarding  the issue of deportation and detention orders, conflicts with the spirit of the European Return Directive (2008/115/EC)[1]. The philosophy of the Directive implies that the detention must be considered as a measure of last resort that should be applied only in the absence of any alternative measure, and if the state is ready to promptly follow measures for the deportation of the individual for who the decree is issued.

Moreover, it has been noted that the detention of asylum seekers continues in Menogeia despite the commitments of the Ministry of Interior to the European Commission and despite the relevant jurisprudence[2] of the European Court of Human Rights and the Supreme Court of Cyprus according to which, the detention of asylum seekers is considered as illegal.

The detention of a Pakistani citizen, who is a father of a Cypriot citizen, is an example of the arbitrary and prolonged detention of individuals in Menogeia. This particular individual was arrested after actions pursued by his former partner and mother of their child and he is being held in Menogeia for eight months. According to her statements, she managed to obtain the issue of detention and deportation order against her former partner, through access to the Minister of Interior and the Minister of Justice and Public Order.

For this particular case, on the 15th of May 2015, KISA , sent a letter to the Attorney General (among else) of the Republic indicating the facts and asking the investigation of the possible commitment of offenses and abuse of power by the officers of the two aforementioned ministries. According to relevant information, the Prosecutor initially sought explanation from the two ministries concerning the way they handled the case.  However, until today, the aforementioned individual continues to be held in Menogeia and thereafter we have not received any information on any development of this matter.

In the light of the above, KISA calls: