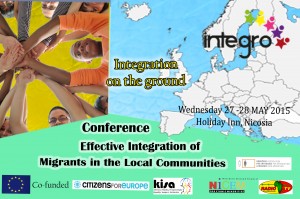 The final conference of the INTEGRO project was successfully held on 27 & 28 of May, at the Holiday Inn in Nicosia. The conference was organized by KISA, as a project partner, on the integration of migrants in the local communities. The conference, with 80 participants, including 38 participants from 15 EU member states, aimed to disseminate the project results, both locally and at EU level, to all stakeholders engaged in the integration process.

During the first day of the conference, opened by the chairperson of KISA’s Steering Committee, a welcoming address was delivered by Mr George Markopouliotis, Head of the European Commission Representation in Cyprus, who, among other things, referred to the new European Migration Agenda. The welcoming address of the Minister of Interior, Mr Socratis Hasikos, was read by an Officer responsible for integration issues in the Ministry.

Congratulating KISA for organizing the conference, the Minister stated that immigration policies should necessarily be accompanied by the corresponding integration policies of migrants in host societies, something which “is achieved through a dynamic, long-term and continuous two-way mutual acceptance process  which requires the participation of migrants and the host society.” He went on to add that “civil society has to play a central role regarding the promotion of the integration objectives ….” (and) “that soon a new structured process will be launched and which will hopefully result in a renewed policy and an updated Action Plan. “

This was followed by the keynote speech of a representative of ENAR (European Network Against Racism), mainly on ENAR’s Toolkit for Integration, which developed form ENAR and was used as a basis for the design of five pilot projects – one in each participating country. The pilot integration projects were later presented and discussed.

Subsequently, the results of the pilot projects developed by the project partners in their countries, were presented and discussed: NICEM’s pilot project “Employment, employability and workplace discrimination“, focuses in combating discrimination in the workplace and on the integration process. Radio AfrikaTv’s pilot project “Forum INTEGRO” deals with the role of Media in promoting the integration process. SIMI’s pilot project “With neighbours from elsewhere – Integration of migrants in their localities“deals with the cultural mediators. Citizens for Europe’spilot project ‘”Voting Rights for Third Country Nationals“aimed to promote political rights of migrants and particularly the right for voting and participation.

KISA’s pilot project  is focused on “Promoting and Facilitating the Self-Organisation of Migrant Women in Cyprus”, the major aims of which  are the self-representation and empowerment of migrant women to actively participate in all spheres of public life, including full and equal participation in the labour market, education and political participation, especially in the formulation and implementation of integration measures and policies.

In his closing speech, Mr Patrick Yu, the director of NICEM and representative of the project partners, referred briefly to all the implementation stages of INTEGRO, emphasising the need for fostering the integration process of migrants by all stakeholders. In particular, Mr Yu stated that “I highlight the fact that governments, civil society and social partners need to work together in order to link with the invisible migrant community. We also affirm our commitment to approaching them in order to make the invisible migrant community more actively engaged and participatory in the policy decision-making process alongside with the widest network”.

The project is funded by the European Commission and implemented by organizations from the Czech Republic, Germany, Northern Ireland, Austria and KISA from Cyprus.

For more information regarding the INTEGRO, please visit the website of the project: