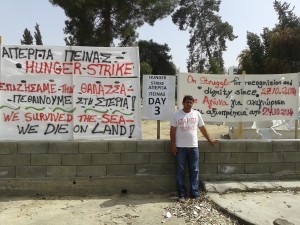 We were very pleased to learn that on Friday 30 October, the group of stateless Kurds from Syria who had protested opposite the Interior Ministry from October 2014 to July 2015 were officially granted Cypriot citizenship following resolution of the last outstanding issues.

Previously (4 August 2015), the Interior Ministry had informed the strikers that consideration of their applications for citizenship had been completed and that it had decided to grant Cypriot citizenship to those who fulfilled the required period of uninterrupted stay in Cyprus.For the remaining applicants, the Ministry had decided to grant citizenship as soon as they fulfilled the required residence period in the Republic. The fact that the government has kept its promises is a very positive element, indicating a willingness and scope to diversify the policy of not granting Cypriot citizenship to refugees, which has been followed until now.

It is recalled that the struggle of the stateless Kurds from Syria began in October 2014, with a protest opposite the Interior Ministry which lasted 10 months. During that time, the protestors held a hunger strike that lasted 58 whole days and refused to take on any liquids for 5 days.

KISA considers that the hardship suffered by the refugees until their vindication was mainly due to the intransigent attitude and wrong policy of the asylum authorities regarding the granting of subsidiary protection to those who are entitled to recognised refugee status. This policy is continuing during the largest refugee crisis that Europe has experienced since the Second World War, driving the majority of refugees who live in Cyprus into poverty and marginalisation. At the same time, a particularly negative issue which needs to be improved by the authorities is the long period (sometimes exceeding seven years) required to complete the processing of applications for the granting of citizenship.

The vindication of the struggle by the stateless Kurds protesters from Syria is mainly due to the tenacity and strength they demonstrated in asserting their rights, as well as to the collective character of their struggle. We note that similar characteristics were present in the protest by the recognised refugees in June 2014[] for Cypriot citizenship, which also had a positive outcome.

KISA welcomes the victory of stateless Kurds from Syria, and considers that the success of the two struggles shows that beneficiaries of international protection, migrants and all groups whose rights are being violated stand a good chance of successfully claiming their rights if they act collectively and methodically. The experience of recent successful campaigns highlights the fact that self-organisation is the first and most important step in the effort to claim rights. By organising and employing coordinated action and mobilisations, refugees and migrants living in Cyprus can be vindicated.