A 13 months old baby detained for crying continuously and asking for its mother! 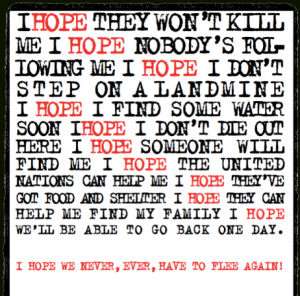 KISA – Action for Equality, Support, Antiracism calls attention again on the case that was published two weeks ago and concerns the inhuman treatment and illegal detention of a mother and a 13 months old baby from Afghanistan. The father is held in the Detention Center in Mennogeia since December 2012, while the mother and her three children were accommodated until two weeks ago in the Reception Centre for Asylum Seekers in Kofinou. After the mother’s arrest on November 18, the two older children were taken to the Children’s Shelter in Larnaca. The baby, who is still at the stage of lactation, initially was given to a foster family, but on November 23 was transferred to the Detention Center of Oroklini Police Station, where the mother is held until now. According to the competent authorities, “the baby was transferred to the detention center because it was crying continuously”, after the violent separation from its mother. [1]

The mother’s arrest was made without the earlier assessment by the competent authorities of the fact that this action is completely incompatible with the rights of children, as these are defined by the relevant Convention. [2] KISA also denounces Social Welfare Services, which took custody of the children while they could refuse, without being able to ensure the daily contact of the children with their parents and the cohesion of the family, which eventually has been broken.

KISA also notes that the detention of the mother and her baby is contravening the Law on the Protection of Minor Children and Suspended or Convicted Mothers of 2005, under which even if the parents were accused for criminal offences, the detention of the mother is imposed only if the court finds that the mother represents an immediate or continuing danger for society. [3] In this case, there was no court decision for her arrest. In contrast, the mother’s detention was decided on the basis of an administrative order issued by the Civil Registry and Migration Department of the Ministry of Interior, something that should be clearly considered as abuse of power.

Moreover, in accordance with the international principles on detainees’ treatment, persons who are detained under the decision of an administrative body exclusively for deportation must be kept in a separate area, which prevents any contact with persons detained for criminal investigation purposes. Specifically, the European Committee for the Prevention of Torture has repeatedly noted that the persons detained in the deportation process should not be kept in the same room with persons involved in criminal offenses. [4] The above international principles have already been included in the European Directive 2008/115, [5] which was incorporated in the Aliens and Immigration Law, [6] stating that the detained third-country nationals are held separately from other prisoners. Indeed, as the Commissioner for Administration and Human Rights Protection (Ombudswoman) has been pointed out very recently, this is not the first time that the competent authorities are taking such irregular and illegal actions. [7]

In the light of the above, KISA notes that the detention of the mother and her baby in the Detention Centre of Oroklini Police Station is inhuman and contradictory to Cypriot and European legislation and therefore should be terminated immediately.

[2]           Convention on the Rights of the Child, “Article 9: Living with the parents” και “Article 22: Children refugees”. Access via: http://www.ohchr.org/EN/ProfessionalInterest/Pages/CRC.aspx

[7]           Independent Authority on the Prevention of Torture – Office of the Commissioner for Administration and Protection of Human Rights (Ombudswoman), Nicosia – 7 August 2013, File No. ΕΜP 2.07 – Report regarding the visit conducted in Pera Horio Nisou Police Station on 23rd of July 2013, “Chapter III: Material conditions of detention”, p. 2-3. Access via: http://www.ombudsman.gov.cy/ombudsman/ombudsman.nsf/presentationsArchive_gr/presentationsArchive_gr?OpenDocument