Summary of the project

Since September 2015, KISA started the implementation of the project “End Arbitrary Detention in Cyprus” , aiming to reduce migrant and asylum seekers’ detention in return procedures to a tool of last resort and only in accordance with EU and international human rights obligations of Cyprus by:

This project is funded by EPIM (European Programme for Integration and Migration). EPIM is an initiative of 13 European institutes which aims at strengthening the role of civil society in promoting constructive approaches to migration in Europe.

The beneficiaries and target groups of the project

The main target groups are policy makers, including competent ministers and members of the House of Representatives, government administration, including the Immigration Police Unit,  the judiciary, independent authorities such as the Ombudsman and Human Rights Commissioner,  NGOs and other CSOs working in the field of detention, the media and the general public.

Activities of the project

The project will employ various means and actions, namely discussions and consultations with government officials and departments, the judiciary and House of Representatives, networking, knowledge sharing, exchanging and cooperating with other stakeholders, i.e. other NGOs, human rights and other independent institutions, mainstream and social media, strategic litigation, monitoring detention, empowering migrants in detention, and submission of reports and complaints to EU and international organisations so as to  put pressure and convince the government that it is legally, socially, economically and politically wise and in its  own interest to proceed to radical and effective changes.

The following are the proposed activities under each of the outcomes:

Improving cooperation, networking and coordination of the various stakeholders working in the area of detention.

Informing  and empowering third-country nationals in detention to claim and have access to their rights. 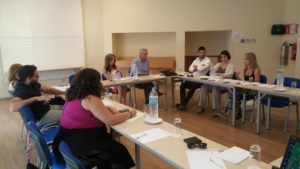 The round-table discussion “Effective remedy in the Cypriot judicial system in relation to asylum and immigration procedures”, will take place on Wednesday 23/11/2016, at the ‘Classic’ Hotel’, Nicosia. The event aims to bring together stakeholders (relevant governmental authorities, independent authorities, NGOs and private practitioners / lawyers who are specialized in the field) in order to have a constructive discussion, exchange views and recommend improvement actions. For more information and for the relevant documents please see (in Greek)