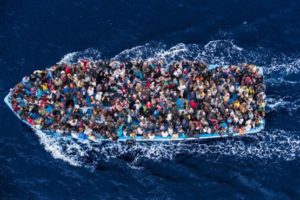 Every year since 2001, on the 20th of June humanity celebrates World Refugee Day[i]. This year, it is celebrated in midst the largest movement of refugees since the Second World War. A movement that, in the absence of institutions and authorities that can match the circumstances, resulted in thousands of people losing their lives and so many more being forcefully obliged to abandon their houses in order to find safety in an inhospitable and mostly hostile EU.

Unfortunately, the response of the EU and most Member States to the refugee issue is completely disappointing. Since the start of the mass movement of refugees, the EU approached the situation as transient and without strong political will to address it. At the same time, the attitude of most Member States is anything but supporting. To date, their policy aims mainly at transferring the responsibilities from one State to the other in all matters relating to the reception, protection and integration of the refugees.

At the same time, the increase of the influence of extreme right, intolerant and neo-fascist movements across Europe is extremely worrying. Unfortunately, these movements, among others, are exploiting the widespread fear of terrorism, achieving to shift the spirit of solidarity with refugees in a climate of suspicion. A consequence of the increased influence of extreme right-wing, neo-fascist and populist circles, is the further strengthening of “Europe-fortress”.

On top of this policy is the recent deal of shame between the EU and Turkey[ii]. This agreement undoubtedly conflicts with the fundamental principles and values of the EU and violates refugee law and human rights law. Furthermore, this agreement proved impractical because, while there are still reasons which prompt refugees to flee to Europe, the more people will attempt to cross the Mediterranean mass grave.

As far as it concerns Cyprus, the majority of asylum seekers and people with international protection are forced to live in dire conditions. Their extremely difficult integration into the labor market and the institutional racism that they face every day, are only some of the evidence demonstrating the complete failure of the asylum system. Further, the deprivation of the recognized refugee status from applicants in combination with the ineffectiveness of the integration policies in the Cypriot society, are promoted by the government in order to send the right message: Cyprus should not be an option for refugees since it is extremely difficult to be able to live a decent life.[iii]

The xenophobic climate skillfully cultivated in recent years by political parties and right-wing, populist deputies towards refugees, has undoubtedly led to the adoption of policies that have impeded the lives of refugees. At the same time, ELAM, the neo-Nazi political party and other right-wing movements have politically invested on this climate of xenophobia and racism, managing to increase their influence in society and to enter the Cypriot parliament.[iv]

On the occasion of World Refugee Day, KISA asks from the EU:

From the Republic of Cyprus:

[iii] According to the Ministry of Interior “ the whole handling on our part seems to have been quite appropriate but without at the same time constituting an invitation for others to follow”, Please see the video (Greek) https://goo.gl/3HBBSw

[iv] Please see KISA’s Press Release about the results of the elections: http://goo.gl/ScOhIA