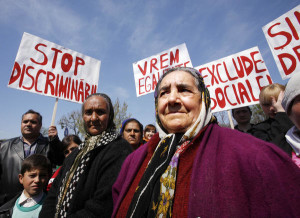 According to recent reports in the Greek-Cypriot and Turkish-Cypriot press[i], the Ministry of Interior of the Republic of Cyprus has decided to proceed with evictions of Roma families living in Ayios Antonios in Limassol for the last few years. This fallacious and inconsiderate action, in addition to the possible cause of complications to the process of finding a solution of the Cyprus problem, intensify concerns about violation of the rights of the Roma from the Republic of Cyprus.

Specifically, on the basis of a relevant research conducted by KISA and all the reports published last week, the District Administration of Limassol sent a notice in early March 2016, to ten Roma families, asking them to leave the premises allocated to them by the state in St. Anthony of Limassol until April 10th. As the authorities invoked, these notices were issued after an investigation conducted by the Cyprus Intelligence Agency, which found out that the reported families have properties in the uncontrolled by the Republic of Cyprus areas and therefore they are not entitled to reside in a Turkish-Cypriot estate in the South. It is worth mentioning that in this case, the Ministry of Interior invokes a research of the Cyprus Intelligence Agency in order to evict from their residence, families from one of the most vulnerable groups of the population, while at the same time it declared itself unable to carry out research in cases where citizens residing in the uncontrolled areas are claiming access to basic rights.

Nonetheless, a positive aspect of the whole issue is the fact that, after a constructive approach of the case by Mr. Akincii and President Anastasiades during yesterday’s meeting, it was decided to withdraw the eviction of the Roma families and to settle the problem. However, according to information, the Authorities insist to evict one family, claiming that this family was transferred to the house where they have been living for the last few years without authorization, ignoring the fact that the house that they were originally given was inadequate.

The Authorities’ intention is to transfer the family in a settlement of prefabricated rooms in Polemidia region where other Roma families reside. A settlement in which no family ought to live in any case, since the accommodation conditions can only be described as appalling. Indicatively, in some of the premises of the settlement there is no electricity and water with all that this entails for the families residing there.

In the light of all the above, KISA calls on the relevant authorities to: