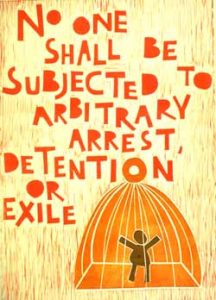 The police exceeded all limits of discrimination when, for the investigation of a complaint of theft of a few slices of ham and a plate of pasta, of the total value of €20, arrested and detained a refugee single-parent, who denies the charge. The detention was endorsed by the Nicosia District Court, which agreed with the need to detain the woman in view of the intention of the police to seek the … stolen property! As for the Social Welfare Services, in “assuring the best interest of the child”, they provided all support to the above actions by undertaking to “place the child under their protection”!

The deprivation of freedom of every person and, especially of a single-parent woman of a young child, constitutes restriction of the most fundamental human right of personal freedom and can be justified only in exhaustively defined circumstances that were not present in the present case. This position is strengthened by the fact that the woman was eventually released without any evidence materialising against her for the offence she is being charged with.

Ms M.I. (pseudonym) came to Cyprus more than 5 years ago with a work permit. She had left her country for fear of being killed by her family for “shaming their honour” as she became pregrant outside marriage.

In Cyprus, after working for two months, her employer fired her when he realised she was pregrant. As she was not aware that her dismissal was illegal, she did not report it and ended up with losing her legal residence status in the country. Her employer went even further and reported her to the police Aliens and Immigration Unit, which as usual obliged and proceeded to her arrest for deportation purposes.

During her detention at Menoyia, and while still pregnant, Ms M.I. applied for asylum fearing that she would be a victim of an honour crime if she were to be forced to return to her home country. After her asylum application, Ms M.I. was released but without any support or resources and no information as to her rights. In the period of more than 4 years since her asylum application, which is still pending, Ms M.I. had not received the material reception conditions which the state was obliged to provide her with. Neither had she been assessed in any way, as per the Refugee Law, whether she belongs to the persons with special reception needs in view of her being a single-parent woman, who fears prosecution for gender reasons. It was only last year that the said refugee woman applied to KISA, which then mediated with the competent services, which granted her her rights to reception conditions for a few months and included coupons worth €225, of which  €100 for rent and και €95 for “personal expenses”, such as electricity and water bills. In January 2018, the Social Welfare Services terminated her reception conditions with the excuse that she had refused to seek work as she had been instructed.

What actually happened was that Ms M.I., following the instructions of the SWS, had applied to the Labour Department to register as unemployed. The Labour Department referred her to a flower shop in a nearby village but Ms M.I. was unable to cover the whole-day job because she could not leave her child alone when not at school, for which she informed the Labour Department. When the latter learned of the 5-year old child, it refused to register her again as seeking work and advised her to apply again to the SWS to register her as belonging to a vulnerable group so that she would continue to be granted her rights to material reception conditions, without applying for work because as mother to a young child she could not work. Ms M.I. applied again to the SWS, which refused to recognise that she belonged to a vulnerable group who cannot seek work. It is noted that her child does not have a birth certificate because she could not pay the fine imposed by the District Administration Office when births are not registered on time. The SWS refused to pay for the fee for the birth certificate, as a result of which the child has no birth certificate. Since then, Ms M.I. and her child survive without any resources.

KISA considers that the haste and severity used by the law-enforcement and judicial authorities as well as the SWS in exercising their powers are not, unfortunately, an exception but rather the rule in the unequal and discriminatory treatment of migrants and refugees on the basis of ethnicity and/or residence status, as well as of the punitive attitude of the authorities as a result of the institutional racism pervasive at every level of public administration and public authorities.

KISA also considers equally discriminatory and immoral the actions of the SWS which, in contravening their role and mission, especially in relation to children’s rights and well-being, not only did they not prevent the mother’s detention by pointing out that it would not be to the interest of the child, but they colluded to the child’s separation from her mother. By terminating the mother’s material reception conditions in order to force her to seek work, the SWS violated the law for the protection of vulnerable groups that the refugee single-parent woman and her child belong to, and which they ought to support, instead of condemning them to denigration and wretchedness.

Welcoming the refugee mother’s release from detention, KISA calls on the state to -:

KISA also calls on the police to proceed immediately to the full investigation of the theft complaint, including the motives of the complainant, whom the refugee woman does not know at all.