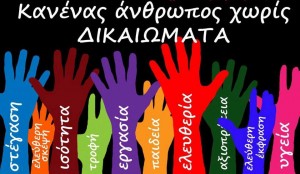 Today, Tuesday, 4 February 2014, the 18th Session of the Universal Periodic Review Working Group of the United Nations Human Rights Council was held in Geneva, during which the state of human rights in the Republic of Cyprus was examined. The Republic of Cyprus was represented by the Legislation Commissioner, Leda Koursoumba, and the permanent representative of Cyprus at the offices of the UN in Geneva, Andreas Ignatiou, while at the same time representatives of the five competent ministries were present. [1]

To start with, the Legislation Commissioner presented the state of human rights in the Republic of Cyprus. Her presentation focused on a series of crucial issues, like migration and asylum; the fight against human trafficking, against xenophobia, against discrimination and racism; the conditions of detainment – mainly of informal migrants – and the operation of the Central Prisons. Meanwhile, issues regarding equality between the sexes and dealing with domestic abuse, as well as the protection of children’s rights, and the rights of persons with disabilities, and of LGBT (Lesbian, Gay, Bisexual, and Transsexual) persons were discussed extensively.

KISA – Action for Equality, Support, Antiracism believes that the Legislation Commissioner made a rather modest presentation, that focused almost exclusively on the positive aspects of the entire situation, however without referring specifically to the essential and deep-seated problems regarding violations of human rights observed in the Republic of Cyprus. For example, while the actual legislative framework for the establishment and protection of human rights is judged to be generally adequate, at the same time there are many problems surrounding the apt and proper application of the aforementioned legislation and national action plans.

This was followed by a session of two-minute suggestions from each of the representatives of 76 member states of the working group. The crushing majority of the suggestions tackled issues relating to protection of victims of human trafficking as well as the fight against networks of human trafficking; the violation of migrants’ rights, particularly those of house maids and workers in the agricultural sector; the processes and conditions of detainment of informal migrants; the deterioration of the legal and political framework around asylum provision; and the nearly non-existent protection of unaccompanied minors with international protection status. Particular weight was also given to issues surrounding the combatting of xenophobia and discrimination in all sectors; the fight against racism and hate rhetoric; the promotion of multicultural education; as well as the increased incidents of domestic abuse and violation of children’s rights, of persons with disabilities and of LGBT persons. [2]

KISA highlights that the fact the tremendous majority of the aforementioned statements and suggestions are about issues of migration, asylum and human trafficking, as well as xenophobia, discrimination and racism, is an indication of the concern of the international community regarding the state of human rights of migrants as a whole. At the same time, it notes that this is reflected particularly through the relevant suggestions of the rest of the member states of the European Union. Aside from the fact that these suggestions will most likely be included in the concluding remarks of the Working Group for the International Periodic Review of the Human Rights Council of the United Nations, which will be published very shortly, KISA underlines that they will most likely be taken into account in relevant evaluations of the state of human rights that are also being conducted  at a European level, thus demanding the Republic of Cyprus takes vital measures to improve the state of human rights of migrants, refugees, and minorities.

Additionally, KISA believes that the Legislation Commissioner should not have represented the Republic of Cyprus at the 18th Session of the Universal Periodic Review Working Group of the United Nations Human Rights Council, as she is also the head of an independent authority that operates as an observation mechanism of the state of human rights in Cyprus.  [4] The representation of the Ministry of Interior by a member of the otherwise “independent” Refugee Reviewing Authority – that basically represented the Ministry of Interior on issues regarding asylum – is also completely unacceptable.

[1] More specifically, representatives of the following ministries were present: 1) Ministry of Interior, 2) Ministry of Foreign Affairs, 3) Ministry of Education and Culture, 4) Ministry of Work and Social Securities, and 5) Ministry of Justice and Civil Order.

[3] According to the particular condemning ruling of the European Court of Human Rights, the Republic of Cyprus violated the right to effective judicial means (article 13), regarding violations of the right to life (article 2), total prohibition of torture and inhumane and cruel treatment (article 3), as well as the right to personal freedom (article 5) in the case of an asylum seeker who was detained and deported to Syria in 2010.

KISA – Action for Equality, Support, Antiracism – Tuesday, 23 July 2013. “Unanimous ruling of the European Court of Human Rights condemns the Republic of Cyprus – Lack of effective judicial means in the case of deportations and detentions of asylum seekers and illegal detainment with a view to deportation”.

[4] Aside from her duties as Legislation Commissioner, Mrs. Leda Koursoumba, also has responsibilities as Commissioner for the Protection of Children’s Rights.

Watch the entire Session of the Working Group for the Universal Periodic Review of the Human Rights Council of the United Nations: