The rescued Syrian and Palestinian refugees are left οn the street 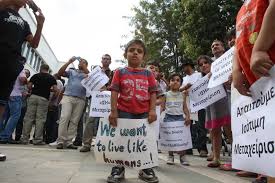 Yesterday, 3rd of February 2015 was the last day of the refugee camp in Kokkinotrimithia, where since September 25th 2014 hosted the 365 Syrian and Palestinian refugees that were rescued while on a boat near the coast of Cyprus.

The government and authorities reached the camp yesterday giving to the refugees an only and finite option before closing the camp down. The option/solution consisted in giving each of them an amount of 500 euros to each adult and 200 euros to every minor and transferring them by bus, since the camp will have closed, to whichever city they preferred. The biggest majority of the refugees decided to go to Nicosia. Thus after the collection of their belongings in plastic bags they were brought and left in front of the Central Nicosia Post office in Eleftheria square. In the following days, the government promised to issue them a “Visitors permit.”

According to the law a “Visitors permit” as explained on the Ministry of Interior’s webpage is granted to “third country nationals who enter the Republic of Cyprus and wish to stay for more than three (3) months, without employment rights” provided they can prof that they have sufficient income from abroad to maintain themselves and private health insurance.

KISA is wondering which criteria will be taken into consideration by the government in order to grant to the refugees this particular permit/status and it’s very concerned about the rights they will be granted. In addition denounces the government for making them leave the camp without having this permit or other documents, which leads them to being undocumented and thus among others no one can rent them a place to stay since according to the law they need to prove that they legally reside in Cyprus. KISA worries that the Government delayed the issuance of the permits on purpose so that the refugees will not be able to remain/ return back to the camp when they will actually realise that the particular permits do not meet their needs.

KISA, following a call for help from the refugees left alone in the streets, released to the media and public an emergency call for help mainly asking for accommodation and food for the refugees. In the meantime, the refugees were temporarily waiting for a response in the Mosque’s premises. A response to the appeal came from CCMC (Cyprus Community Media Center) which offered to host them in its premises, but unfortunately since the premises are in the Buffer zone and the refugees still do not have documents, in order to prevent further complications they opted not to go.

Another response to the appeal came from “New Life International Church” in Strovolos, which some refugees visited and eventually decided to go there. Due to the late response the majority of the refugees found emergency accommodation to acquaintances or hotels and only around 15 people which were in the evening still without shelter, were taken to the church. In the church, they were really warmly welcomed and provided with warm food and beds for the children. Today another 10 refugees joined the place and according to the Church they can stay there as long as they need.  Within tomorrow according to the refugees, the rest of them will join them too. Furthermore, KISA is trying to organize the provision of food for the refugees.

KISA calls on the government:

Finally, since their accommodation was settled, KISA appeals to the public and to the humanitarian organizations for help in the provision of food for the Syrian and Palestinian refugees.