The Interior Minister’s statements on refugees are demagogic and racist 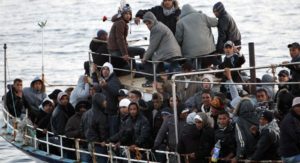 On Friday, 3/2/17, 93 refugees arrived in the Republic of Cyprus on a boat, 47 among them being children and 6 of which were unaccompanied minors. Since then the refugees have been staying at the Pournara rescue camp in Kokkinotrimithia even though they are not considered as having been rescued. KISA expresses its joy for the fact that all refugees are safe. At the same time it expresses its discontent regarding the racist rhetoric and demagogic statements expressed by the interior minister, Mr Sokratis Xasikos, not only against refugees but also against NGOs which offer their support. Unfortunately these statements are being reproduced and promoted by the media as such and without any attempt to include the opinion of refugees and the NGOs concerned.

More specifically, the interior minister has, through statements made in the media and particularly in the national channel (CYBC), attacked the NGOs that support refugees supporting that we are preoccupied with ‘broken taps’ at the Kofinou Reception Centre, rather than being concerned with the more important issues that refugees face. We contend these unacceptable statements regarding the intentions of the NGOs and we remind the interior minister that other independent bodies, such as the Ombudsman and the UNHCR, have also taken a position about the problems at the centre. We wonder whether the minister considers that these bodies are also interested only about ‘broken taps’. We further wish to remind the minister that KISA has repeatedly informed his ministry about the serious problems faced by refugees at the Kofinou centre some of which include the following:

The minister’s statement regarding the deportation of 3 refugees from Syria on the basis of a previous informal stay in the Republic of Cyprus, indicates that the minister chooses to ignore the basic principles of refugee law, as well as previous acquittals the Cypriot courts in relation to refugees’ ‘illegal entry’. In case where the refugees in question are deported, this would result in inefficient use of public money and the meaningless preoccupation of the courts since the Republic of Cyprus is under de facto obligation to provide international protection. The minister cannot continue to ignore this fact and it is, thus, evident that such statements are expressed purely for demagogic purposes.

The minister refers in his statement the ‘danger of being flooded by 3 million’ refugees and the ‘controlled and targeted flow of refugees toward the Republic of Cyprus’, supporting that ‘according to his information, seven-hundred more refugees will be sent by those responsible’. He further stated that the RoC is a semi-occupied island and under no circumstances does it wish to be considered as an ‘invitation’.

government are not representative of reality. In actuality, the main reason that the flow of refugees towards Cyprus appears greater than before is the EU – Turkish deal concerning the refugee ‘crisis’ which lacks legal basis. This agreement essentially aims at the closure of access points for refugees in Europe through Greece, leading refugees, as a result, to use other routes including Cyprus.

We further wish to remind the Minister that Turkey, following a request made by the Cypriot government and intervention by the EU, and, unfortunately, the consent of the UNHCR, accepts back all the refugees who attempt to move towards the controlled areas in order to apply for asylum through areas which are not under the Cypriot government’s control.

Further, as the minister sounds like a broken record as far as the ‘semi-occupied country’  is concerned, with which he evokes that refugees constitute a burden for the RoC and the Cyprus question, we call upon him to consider and express his position in public about his own role concerning the Cyprus question historically, rather than unfairly targeting refugees. It is finally time that he as well as other ’patriots’ stop using the Cypriot problem as an alibi for their inaction and lack of political will when it comes to resolving current serious problems.

KISA calls upon the media to take responsibility as far as the reproduction of hate rhetoric against refugees is concerned as well as against NGOs. KISA further calls upon the interior minister to consider the consequences of hate rhetoric which he himself expresses against refugees, the same time at which his ministry is requesting millions of euros from EU funding to, supposedly, raise awareness in the Cypriot society in regards to refugee matters and to ease refugees’ integration into the Cypriot society.