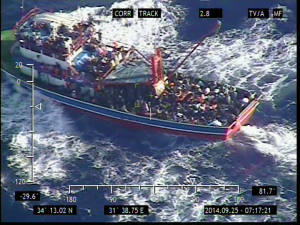 The 345 refugees from Syria (out of which 259 are adults and 86 children and 9 of the children are unaccompanied) which were rescued by the competent authorities of the Republic of Cyprus on the 26th of September 2014, while they were on a small boat which was sailing 50 nautical miles southwest of Paphos’ coast in rough sea conditions, are unfortunately still up to date living in the Kokkinotrimithia Reception Center without any future perspective.

KISA-Action for Equality, Support and Antiracism considers as positive developments the successful rescue operation of all the persons aboard the ungoverned boat, as well as the instant setting up of the necessary reception structures by the competent authorities, in cooperation with human rights NGOs and charity organisations.

However, apart from the humanitarian means of receiving the rescued refugees, which normally should have been necessary only for a couple of days, KISA believes that is unacceptable that these people are:

It is also noted that a few days after the rescue of the Syrian refugees, the Minister of Interior stated that the refugees “can, with a request addressed to the Republic of Cyprus, be given visitors status for one-two or even three months, and within this time framework whoever wishes can abandon the country”. In addition, the Minister of Interior added that the refugees can “without any significant guidance, submit their will and preference, if they want to submit an asylum request or leave the country”. With these precise statements the Minister essentially fomented the illusions of the rescued refugees, which knowing the difficulties that refugees face in Cyprus, are willing to go to other EU member states, instead of applying for asylum in the Republic of Cyprus. KISA retains that the Cypriot competent authorities and especially the substantive Minister of Interior should have helped the refugees to realize the problems that they have to face, instead of further discouraging them from applying for international protection from the Republic of Cyprus.

Furthermore, KISA notes as a particularly negative fact the limitation of the refugees to access free information for the Republic of Cyprus’ procedures of granting of asylum. It is recalled that initially the access of KISA’s representation in the Kokkinotrimithia reception center of the rescued refugees, was denied and was only feasible with the strong protest of KISA’s General Director. As it was already mentioned in the previous press release of KISA, this act infringes the fundamental principle of free access of human rights NGOs in reception centers of refugees and asylum seekers, with aim of free access of these specific persons to information on the asylum and grant of international protection procedures. [1]

In this framework, it is no coincidence that from the 345 refugees, only 6 people submitted a request for asylum in the Republic of Cyprus. An even sadder fact is that around 70 people escaped in the uncontrolled areas of the Republic of Cyprus and asked to be transferred in Turkey, since they believe that there the reception and integration conditions will be better, but in the end they were “deported” back to the Republic of Cyprus through the United Nations.

KISA considers that the aforementioned developments are of no coincidence, but are included in a more general framework of discouragement of refugees from applying for asylum in the Republic of Cyprus. In this exact framework, the message given through the granting of temporary visitors status and the statements made by the Minister of Interior, are that the rescued refugees lack an essential possibility of equal integration in the Cypriot society. Consequently, these persons are driven to the option of a voluntary withdrawal from the Republic of Cyprus and their transfer to Turkey or other EU member states, where they can seek for better and more decent living conditions.

KISA calls on the competent authorities of the Republic of Cyprus and the Minister of Interior to publicly and clearly commit that in case of submission of requests of asylum by the Syrian rescued refugees: a) these will be examined in a reasonable amount of time, from (3) up to (6) months, and b) it will be granted to these people the recognized refugee status. KISA believes that such a commitment of the Republic of Cyprus, apart from being in accordance with the refugee law, it will also contribute to the declining of the just worries of the refugees about their future, in case of submission of asylum application in Cyprus. Otherwise, the refugees from Syria will continue to face the danger of exploitation by traffickers and dealers, through dangerous means and paths of transfer to other countries, putting in danger themselves and their families.

Notes to the Editor: 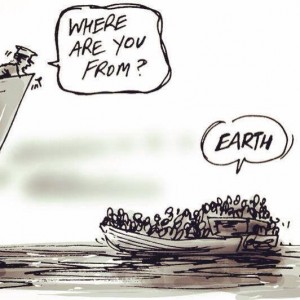