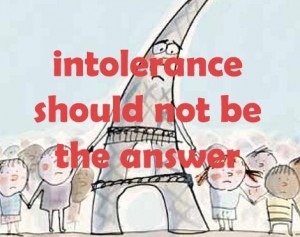 The murderous attacks that took place in Paris last Friday and the mass slaughter of more than 130 civilians committed by the terrorist organization Islamic State (ISIS) have shocked and saddened the whole of Europe and the world at large. The reaction of the French and other European governments, with increased security measures for identifying and destroying the specific, as well as potential, murderers of ISIS appears to be normal and essentially necessary.

At the same time, extreme right and neo-fascist political parties, circles and politicians are attempting to take advantage of the tragic incidents in Paris, by linking the attacks with the refugee crisis, thereby fuelling a new wave of xenophobia and racism against refugees and migrants, but also against Muslims who live in Europe.

The first incident which these political parties and circles, with the National Front party of Marie Lepen as the forerunner, sought to take advantage of was the news, broadcasted also repeatedly by RIK, of a Syrian passport allegedly belonging to one of the attackers in Paris, as well as information that this person was a refugee who had reached Europe through Leros. The specific piece of news was presented as a confirmation of allegations that there are terrorists among the refugees, which further facilitates the connection between the refugee crisis and terrorism. At the same time, information that the passport of the terrorist may have in fact been forged has not received the required publicity from the mass media, leaving most people with the impression that the initial information was a confirmed fact.

KISA’s position is that the irresponsible and criminal attempt of utilizing the fear borne as a result of the terrorist attacks in Paris and elsewhere, as well as the active attempt to introduce the closure of borders and the strengthening of Fortress-Europe on the migration and refugee agenda, will lead to the reverse outcome than the one desired. The shortsighted tactic of blaming refugees and migrants themselves for the current situation is not only inexcusable and unjustified but it will, unquestionably, lead to the infringement of the human rights of minorities, particularly the Muslim population in Europe, against the very same values upon which Europe has been founded.

The EU must indeed review its policies regarding asylum; not, however, in the direction set forth in the Valetta summit, with the closure of its borders and additional fences and barbed wires, which further strengthen Fortress-Europe. Following the Paris attacks, the EU must undertake its responsibilities and respond to the current challenges by swiftly providing asylum and protection to the refugees who arrive on its soil, many of whom are being persecuted by the same terrorist – murderers of ISIS who threaten Europe.

Simultaneously, the EU will have to undertake its historical responsibilities by contributing, in the long-term, to the restoration of the political and economic stability, democracy and freedom in the countries of origin of the refugees.

We underline that the attempt of transforming refugees and migrants into scapegoats, as well as taking repressive measures against Muslims in Europe, will not restrain terrorism. The strengthening of Fortress-Europe and the breach of human rights of European Muslims will lead to the complete and irrevocable departure of Europe from its founding values and will contribute to the intensification of murderous and other attacks by fundamentalists and terrorist organizations like ISIS.

Finally, we note that another massacre of at least 44 civilians in Beirut, Lebanon, only a couple of days prior to the Paris attacks, also the result of an ISIS terrorist attack , which seems to have gone almost unnoticed by the ‘sensitive’ European public opinion, as well as other mass murders of innocent citizens around the world caused by other terrorist organizations like Boko Haram in Nigeria and other African states, clearly show that fundamentalism and terrorism are not eliminated only with increasing security and military measures.