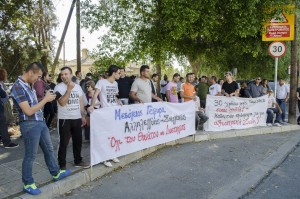 A solidarity event with the stateless Kurds from Syria was successfully held yesterday, 14/5/2014, outside the House of Representatives. The refugees, some of whom are on their 19th day of hunger strike, are asking the authorities to grant them the recognized refugee status instead of the subsidiary protection status.

Also, a delegation of KISA had a brief meeting with the European Commissioner, Mr Avramopoulos, after his speech in the House of Representatives.

At the meeting with the Greek Commissioner, the Executive Director of KISA briefed him about the just demands of the stateless Kurds from Syria who, despite the fact that they have been living in Cyprus for more than ten years, the state continues to refuse to recognise them as refugees. It is noted that both the President of the House of Representatives and the United Nations High Commission for Refugees (UNHCR), with appeals to the Interior Minister, are asking for  the re-examination of the asylum applications of the strikers and to grant them the recognised refugee status. 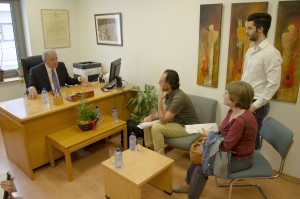 Furthermore, the Executive Director conveyed to Mr Avramopoulos that KISA considers as positive and towards the right direction the proposals of the European Commission (European Agenda), announced on 13/05/2015, concerning the issue of the thousands of refugees and migrants arriving in Europe through the Mediterranean Sea. KISA considers that especially positive are the measures to enhance rescue operations in the Mediterranean, improve the safe and legal mechanisms for admitting refugees from conflict zones, aim at a fairer allocation of refugees in the EU Member States and strengthening the common asylum system, including essential integration policies of refugees.

At the same time, KISA expressed its concerns regarding the emphasis that continues to be given to measures for policing of the external borders and the use of military operations, especially taking into consideration that there is a risk, as in the past, of these measures taking precedence over the aforementioned positive measures. 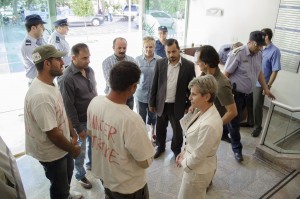 KISA considers that the key to the successful implementation of the above proposals is the political will and consistency of all EU Member States. The willingness to cooperate on such an important issue is vital in achieving the targets set by the agenda of the European Commission.