Signing of the Memorandum for Cooperation between NGOs and the Police 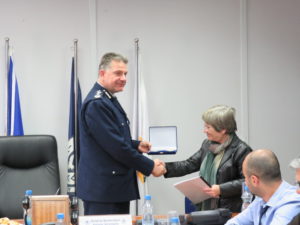 Today (09/03/17) a Memorandum for Cooperation[i] to protect and promote human rights was signed between the Cyprus Police[ii] and 12 Non-Governmental Organisations, including KISA.

On behalf of the Police, the Memorandum was signed by the chief of the force, Mr Zacharias Chrysostomou. Among other points raised, Mr Chrysostomou referred to the importance of signing the Memorandum, the Police’s focus on protecting human rights, as well as to the pursued objective of cooperation between the Police and NGOs. It is worth mentioning the Chief’s statement regarding his realisation that there was a hostile attitude towards KISA on the part of the Police[iii] when he took over his post in 2014. Furthermore, the chief of Police referred to the improvement in the relationship between KISA and the police in recent years, beginning with a meeting between representatives from the organisation with himself in March 2015.[iv]

on behalf of KISA, the Memorandum was signed by the chairwoman of the Steering Committee, Ms Anthoula Papadopoulou, who in a brief statement[v] recognised and welcomed the different attitude taken by the current leadership of the Police towards NGOs and described the signing of the Memorandum as a concrete indication of cooperation between NGOs and the Police. Also, the chair of the KISA Steering Committee noted that “the mutual recognition of the role and position of NGOs and the mutual respect between the two parties form a precondition of the cooperation in question.”

KISA recognises the importance of today and welcomes the aforementioned positive developments. At the same time, we believe that the signing of the Memorandum must form the starting point for an in-depth discussion that will lead to the signing of further individual memorandums for issues that, among others, touch on the compelling need for:

[i] Please see the memorandum (in Greek): https://goo.gl/mhTzpr

[ii] Please see the Press Release of the Police (in Greek): https://goo.gl/3EYhHq