Serious violations against the rights of the newly arrived refugees 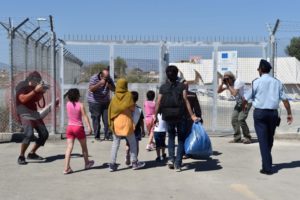 The Executive Director of KISA visited yesterday (September 8 2016) the emergency camp ‘’Pournara’’ in Kokkinotrimithia  with the purpose of being informed on site regarding the reopening of the area and in order to inform the 51 refugees hosted there on issues related to their rights, according to Directives 2013/32/EU[i] regarding common procedures for granting and withdrawing international protection and 2013/33/EU[ii]  about the standards for the reception of applicants for international protection, respectively. Both the Directives explicitly predict the right of both applicants and potential applicants for international protection to independent support and information, as well as the right of NGO to have access to them.

The Lieutenant Colonel Mr. Loukas Hadjimichael, as Acting Commander of Civil Defence, which is responsible for running the camp, communicated with the Permanent Secretary of the Ministry of Interior, and informed the Executive Director of KISA about the decision to not allow visiting the refugees.  It is worth noting that access to the area has been given to NGOs providing humanitarian aid as well as to journalists, including the possibility to conduct interviews with hosted refugees. This disproves the claim by Lieutenant Colonel Hadjimichael to deny a visitation permit to KISA due to the fact that “the results of the medical exams that the hosted refugees have been submitted to have not yet been evaluated”.

Also, during the presence of our representative there, Lieutenant Colonel Hadjimichael told us that “the hosted refugees are not being detained, but they aren’t allowed to leave the camp”. Also, he informed us that 4 of the refugees have been criminally prosecuted and are in custody awaiting trial due to their previous informal stay in Cyprus.

KISA publicly condemns the illegal act of the Ministry of Interior to disallow the visit of KISA’s Executive Director to the camp since it violates the Directives 2013/32/EU and 2013/33/EU. Both these Directives are directly applicable in Cyprus, although they haven’t been incorporated into national legislation, since the time period of two years predicted by the Directives for their implementation has elapsed. At the same time, we believe that the restriction of the freedom of the guests at the camp constitutes “unofficial’’ detention and therefore, is arbitrary and illegal.  Additionally, the criminal prosecution of the 4 refugees due to a previous informal stay and placing their names on a stop list, violates refugee law.

Further, we believe that the 55 refugees who arrived by boat on the shores of Cyprus, but haven’t been collected by the authorities after a rescue operation, should not have been transferred to this particular camp, which has been created with an EU sponsorship for purposes pertaining to the coverage of emergency rescue incidents, and, therefore, does not satisfy the conditions predicted in Directive 2013/33/ΕU regarding the standards for the reception of applicants for international protection.

Moreover, we are wondering whether the decision by the competent authorities to disallow the visit was due to vindictive motives towards KISA, since, in the past, our organisation has asked for investigations into complaints that came to our knowledge or that were related to incidents we were eyewitnesses to and according to which a former member of the Civil Defence and then director of the camp had:

It is noted that for the refuse of access to ‘’Pournara’’ and for all the aforementioned facts, we have already proceeded with complaints to the relevant domestic and European institutions.[iii]

Based on all the above, KISA call on the relevant authorities to:

[i] Please see the Directive at: http://goo.gl/LRvPsW