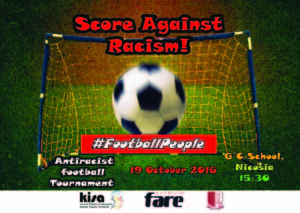 KISA, inspired by the Football People Movement is organizing the football tournament ‘Score Against Racism’ which will take place on 19 October 2016, 15:30, The G C School of Careers in Nicosia. More than 150 children will take part in the tournament, including children of refugees and migrants as well as teenagers and adult refugees/migrants. The event is sponsored by FARE Network and will take place within the framework of “football People action weeks’’, 6 – 20 October, at the same time as other activities against racism which will take place around Europe. It is noted that professional players of Omonoia Nicosia will attend the tournament while the event is also supported The G C School of Careers and the football academies of Omonoia Nicosia, APOEL, G C School, Thoi Lakatamias, and Galaxy fc. The whole event is organised in the framework of the Rainbow Festival 2016.

Racism is a phenomenon, which, due to various factors, has been spreading during the last few years. Sports constitute an integral part of society and usually mirror the prevailing social phenomena. Therefore, racism has crept within sports and particularly within the most popular one in Cyprus as well as around the world, namely, football. At the same time however, because sports and society tend to go hand in hand, certain circles abuse football’s popularity and use it as means to spread ideologies such as racism, neo-nazism and chauvinism in the wider society.[1]

Racism constitutes an enemy of humanity and sports and it must be faced as such. This is why, in an organized and collective manner, we join thousands of other organizations and citizens from around the world, among which will be organized team followers and professional football players whereby together we will be ‘Scoring Against Racism’ and send messages in favor of an intercultural society. “The weeks are now the biggest social change activity in sport and we are happy to count on KISA to help us take further the message and celebrate with us” said Piara Powar, Fare Executive Director.

As far as KISA’s tournament is concerned, this will be divided into two parts. Initially, from 15:30 until 18:30, will be for children between 6 and 12 years old who train in football academies. Refugee and migrant children will join these teams. In the second part of the event, which will start at 18:30, teenagers and adult refugees and migrants will gather to play football with the primary aim to create an amateur football team that will be loyal to the idea of equality of all human beings and against any form of racism and discrimination.

Except from the children of the football academies, other children, boys and girls, of ages between 6-12 years old can also register to participate in the tournament. As regards the participation of teenagers and adults (6×6), it is possible for teams of at least 6 players, the majority of which are refugees/migrants to register, as well as for individuals who will later join the mixed teams of refugees/migrants. For participation in the tournament please get in touch with us at 22878181 or at petros.heracleous@kisa.org.cy.

[1] See for example how the Golden Dawn in Greece is taking advantage of football to recruit members: (in Greek )http://www.tovima.gr/sports/article/?aid=511718