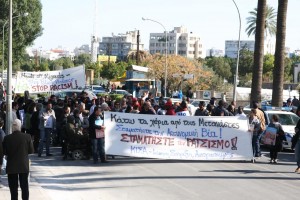 We – the undersigned communities, organisations and groups – are peacefully marching today, Sunday, 8 December 2013, in protest against the unacceptable and arbitrary practice of racial profiling, police violence and abuse of power. We also declare our opposition and resistance to any form of discrimination and racism, demonstrate our solidarity to all victims of police violence, racist attacks and hate crime, and fight for the promotion of equality of all people, including migrants and refugees.

We are calling on the government of the Republic of Cyprus to adopt and implement immediately a zero tolerance policy against racial profiling, police violence, discrimination and racism, a policy necessitating a number of the measures below, as per the recommendations of CERD (Committee for the Elimination of Racial Discrimination) of the United Nations, at its 83rd session on 12-30 August 2013: 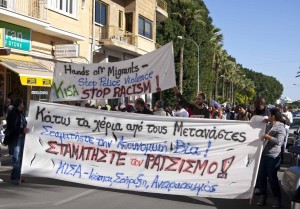