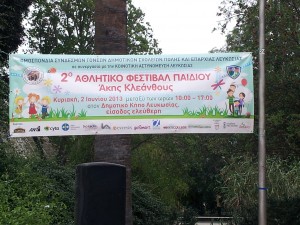 KISA – Action for Equality, Support and Antiracism publicly reports another incident of discrimination, unequal treatment, and exclusion of migrants, which took place today, Sunday, June 2, in an open and public green space, where entrance is free, in Nicosia.

More particularly, the Federation of Associations of Parents of Primary Schools in the City and District of Nicosia, in collaboration with the Nicosia Municipal Police, organised today, between 10:00-17:00, the “2nd Athletic Children’s Festival Akis Kleanthous” in Nicosia Municipal Park, which is located next to the House of Representatives. This municipal park is used by many migrants, who live and work in Nicosia, as a meeting place on Sundays that they have the day off from their work. In this way, they have the opportunity to socialise, co-organise various multicultural events, and in this way enjoy their fundamental civil and social rights.

In fact, in at least one case, a migrant, who managed to spread down a blanket in order to sit on the grass, just after she entered the park, was immediately drawn away by the police officers. When she asked the reason she was drawn away from the park, police officers responded that “the children should not see migrants spreading their blankets and their food on the ground of the municipal garden during the sports festival.” The migrant woman immediately and aptly responded that “she works every day, taking care of and raising the children of the family that employs her and never had such a problem.”

Representatives of KISA were called by migrants themselves to go there, in order to take the necessary steps with the competent police and municipal authorities and contribute to the immediate solution of the problem, in consultation and cooperation with the festival organisers. When they arrived in Nicosia Municipal Park, the representatives of KISA asked the representatives of the Federation of Associations of Parents of Primary Schools in the City and District of Nicosia to discuss the problem all together in order to find a mutually agreed solution. The representatives of the organisers claimed that the only thing they requested from the competent police and municipal authorities was for migrants not to be allowed  to spread down any blankets for picnic and asked if this recommendation is considered to be a racist one. However, at the same time, they refused to talk with the migrants on how they experienced this traumatic experience and argued that migrants use the Nicosia Municipal Garden whenever they wish, while they asked to use it only for one day, and had not asked for entrance to be denied to anyone.

From their own side, KISA representatives argued that migrants use this park out of necessity, because of the lack of open and public green spaces with a free entrance, while they also expressed their disagreement with the organisers’ position, according to which migrants should not use the place for picnic, even for one day, as such a decision constitutes racial discrimination, unequal treatment, and exclusion. KISA condemns such incidents and publicly supports the free entrance and unobstructed use of open and public green spaces, during the whole year and by all people, without any exception.