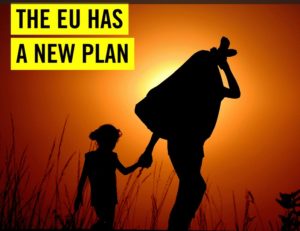 The European Union is set to open a dark chapter in its history unless it rejects the European Commission’s proposal on migration, a coalition of more than 100 NGOs warned on Monday. Shifting towards a foreign policy that serves the single objective of curbing migration, the EU and its member states risk further undermining  their credibility and authority in the defence of human rights, the organizations say. They call on European leaders to reject the Commission proposal that would cement this approach, making deterrence and return of people the main objective of the EU’s relationship with third countries.

The plan proposes using aid, trade and other funds to encourage countries to reduce the number of migrants reaching EU shores. It was put forward by the Commission at the beginning of June and will be discussed by European heads of state and government at the EU summit in Brussels this week. It is inspired by the EU-Turkey deal which has left thousands of people stranded in Greece in inhumane and degrading conditions. Children are particularly affected, with many hundreds of unaccompanied children being held in closed detention facilities or forced to sleep in police cells.

According to the coalition of 104 human rights, humanitarian, medical, migration and development agencies, Europe risks torpedoing its human rights foreign policy, and undermining the right to asylum internationally. There are no safeguards envisaged to ensure that human rights, rule of law standards and protection mechanisms are in place when the EU strikes deals with governments it deems useful for stopping migration to Europe. This leaves a very real risk of breach of international law which forbids pushbacks to places where people are at risk of rights violations. “Responsibility and liability for human rights violations do not end at Europe’s borders,” the statement reads.

Also, the proposal discussed ignores all the evidence that deterrence strategies aimed at stopping migration are ineffective. The EU’s current approach will not only fail to ‘break the business-model’ of smugglers but will increase human suffering as people will be forced into taking more dangerous routes to reach Europe.

The NGO coalition is very concerned that the proposal will result in a wholesale reorientation of Europe’s development aid towards stopping migration. “This is an unacceptable contradiction to the EU’s commitment to use development cooperation with the aim of eradicating poverty,” the statement reads.

The organisations warn that striking ‘migration management’ agreements with countries where grave human rights violations are committed will be counter-productive in the longer term. Such deals will be “undermining human rights around the globe and perpetuating the cycle of abuse and repression that causes people to flee,” they say.

The NGOs call on the European leaders to reject the Commission proposal on migration. Instead, European countries should develop a sustainable long-term strategy for migration management. “The EU, a project built on the rubble of a devastating war, is about to embark on a dark chapter of its history,” the organizations warn in their joint statement.