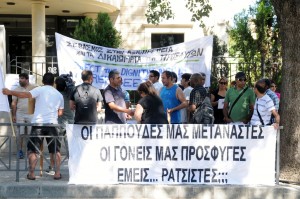 The Interim Coordinating Committee of Refugees and KISA (Action for Equality, Support, Antiracism) are organizing tomorrow Saturday, 22 June 2013, at 09:30, a massive mobilization outside of the House of the European Union (30 Byron Avenue) in Nicosia.

The economic crisis has led the majority of refugees to unemployment, poverty, racist discriminations and social exclusion. In their majority, they live in abject destitution and no longer have access to the necessary resources for housing and food.

Exactly due to the despair in which they have been driven to, as well as their reaction to a policy that aims to enforce them to leave Cyprus, the refugees’ communities are mobilizing tomorrow demanding equal treatment and equal rights for all people, without any discriminations and exclusion.

The Interim Coordinating Committee of Refugees and KISA are calling all civil society organisations and organised social groups to be there and support the mobilization, demonstrating in practice their solidarity to the refugees’ communities that are living in Cyprus.

Refugees and people under international protection, the vast majority of whom are here with their families, constitute one of the most vulnerable groups of the Cypriot society and are facing severe economic and social problems.

The economic crisis has led the majority of refugees to unemployment, poverty and social exclusion. In their majority, they live in abject destitution and no longer have access to the necessary resources for housing and food.

Refugees are not considered by the competent authorities as an integral and equal part of society and as a result they are excluded from policies and programmes in support of vulnerable groups affected by the crisis. Even in cases where their inclusion and equal participation is ensured, their exclusion is accomplished through direct or indirect discrimination. Furthermore, the Republic of Cyprus is possibly the only country in the European Union that until today refuses to grant Cypriot citizenship to persons under international protection and consequently refugees are for years confronted with an uncertain future.

Apart from constituting direct discrimination against refugees receiving public benefit, the procedure for Parliament’s approval of lists of names and amounts of benefit has led to significant delays in the payments of benefits to those entitled to them. In many cases, there is a delay of three to four months, or even longer. Consequently, these families cannot pay their rents or even their food and other essential items.

In the last few years, refugees are being scapegoated and shamelessly accused by various political and other circles as well as the mass media, on the basis of micro-political and other expediencies, as being primarily responsible for the financial crisis and unemployment, for abusing the social welfare system s and for constituting a threat for the demographic and cultural identity of Cyprus. As a result, hostility, discrimination and racism against any diversity are raising significantly, a fact that leads to the emergence and reinforcement of racist, fascist and neo-Nazi groupings and parties.

Despite its recent experience with refugees and emigration, the Republic of Cyprus has adopted an asylum system that is harmonized with the European legislation and policies only in theory, while the daily practice still lags behind even the minimum standards of treatment of refugees. In addition, both the state, as well as society, refuses to this day to accept a simple reality: that Cyprus has been for a long number of years now a multicultural society, which should embrace refugees as one of its integral parts and practically support them, so they could contribute to the development and welfare of society as a whole.

In light of the above, we urge the Cyprus Government to:

Finally, we urge the European Commission, the European Parliament, the United Nations and the international human rights organisations to help and support the Republic of Cyprus to appropriately meet its commitments to the people under international protection in Cyprus.