Refugees’ mobilisation outside of the House of Representatives, the Ministry of Labour and the European Commission in Cyprus 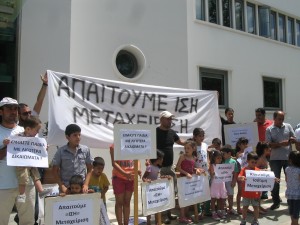 The Interim Coordinating Committee of Refugees, which was formed only a few days ago, during a meeting of refugees from various countries living in Cyprus, organised, with the support of KISA, a mobilisation of refugees’ families with their children outside the House of Representatives, the Ministry of Labour and Social Insurances, and the Representation of the European Commission in Cyprus. During the mobilisation, representatives of the Interim Coordinating Committee of Refugees and KISA informed the competent authorities about the tragic situation that most people with international protection face in Cyprus, because of the effects of the economic crisis, and also the discrimination, and unequal treatment of recognised refugees, in the context of the revision of the policy of the Republic of Cyprus regarding benefits.

The starting point of the mobilisation of refugees was the House of Representatives, where members of the Interim Coordinating Committee of Refugees and KISA met with the Deputy Director of the House, Ms. Vasiliki Anastasiades, and informed her of the severe problems that recognised refugees and their families face due to the decision of the House of Representatives to individually examine the public allowances of non-Cypriots prior to their payment by the Ministry of Labour and Social Insurances. The representatives of the Interim Coordinating Committee of Refugees and KISA stressed that this decision constitutes a prohibited discrimination, segregating people who receive public allowances into two categories, Cypriots and non-Cypriots, and leading to unequal treatment of non-Cypriots on the basis of their ethnicity. They also informed the Deputy Director of the House of Representatives of the long delays in the process of approving the payments by the Parliament, even after the submission for approval of the relevant funds by the responsible Ministry. As they explained, there is already a four-month delay, as public benefits have not been granted to non-Cypriots and recognised refugees since February 2013.

During the refugees’ mobilisation, the protesters also marched to the Ministry of Labour and Social Insurances, where they met and discussed with the Permanent Secretary of the Ministry, Mr. George Papageorgiou. Once again, protesters stressed the adverse effects brought about by the decision of the Ministry to delay for months the payment of refugees’ allowances.

They also pointed out that the employment of refugees in the farming and agriculture sectors, where they are being referred to by the Department of Labour, at a wage of 420 euro, is impossible, unless they are given additional support, as such a salary would at best allow them to cover their rent expenses, leaving them and their families without any livelihoods.

On his part, the Permanent Secretary of the Ministry of Labour and Social Insurances stated that a monthly allowance will be paid immediately to them, and the issue with overdue benefits will be resolved within a short period of time. In addition, he stressed that the decision regarding the figures of public allowances for the remaining three months is under discussion, and that any decision will respect the existing legislation and human rights.

During the mobilisation that was organised today and the meetings held with the representatives of the competent authorities of the Republic of Cyprus, the Interim Coordinating Committee of Refugees and KISA stressed that the replacement of the public allowances of people with international protection with vouchers is not an issue, as such a measure would constitute discrimination that is prohibited by the law. Such a policy, although it would be possible under existing legislation for asylum seekers only, is not desirable, as it would lead to their stigmatisation and thus foster racism it would create a black market, reliant on the illegal exchange of coupons, and it would also have a number of other discriminatory and racist consequences that would cruelly affect the dignity of refugees.

The mobilisation that was held today ended up outside the Representation of the European Union in Cyprus, where members of the Interim Coordinating Committee of Refugees and KISA sought to meet and discuss the problem of the revision of the policy of the Republic of Cyprus regarding benefits with the Head of the of the Representation of the European Commission in Cyprus. This meeting could not be held today, but is expected to take place in the coming days. 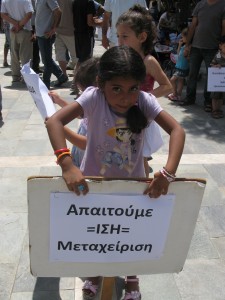