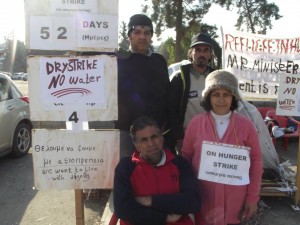 This afternoon, the Head of the United Nations High Commission for Refugees (UNHCR) in Cyprus , Damtew Dessalegne, visited once again the recognized refugees who were on hunger strike for 52 days and for the last four days had stopped also taking liquids  in front of the Ministry of Interior. Following this, the Minister of the Interior, Socrates Hasikos, visited the recognized refugees, in the presence of the Head of the UNHCR in Cyprus.

In contrast to a written statement yesterday, the Minister of Interior changed his previously held rigid stance and showed understanding for the legitimate demands of the refugees. During the two meetings, the recognized refugees received assurances that the applications they had submitted for Cypriot citizenship and long-term residency status would be examined immediately. The Minister of Interior also encouraged those who have not applied for long-term residency status to proceed with such applications, even if they do not have the necessary documents showing that they fully meet the relevant criteria. Furthermore, the recognized refugees were led to believe that they had good reasons to expect a favorable decision regarding their applications. On the basis of the above developments, the recognized refugees decided to temporarily end their almost two-month long hunger strike. As the refugees made clear, however, if the competent authorities do not meet their commitments, then they will be back with more drastic mobilizations.

KISA – Action for Equality, Support, Antiracism respects the decision of the recognized refugees and expects that the competent authorities will meet the commitments undertaken towards the refugees. KISA will continue to support efforts to strengthen the self-organization of refugees, while it will also continue its efforts for the development and implementation of a just and comprehensive asylum policy in general and the equal treatment of persons with international protection regime in particular. Finally, KISA congratulates and thanks all those, individuals and organisations, who have supported this effort, demonstrating solidarity in practice and actively supporting the dynamic mobilization of recognized refugees.