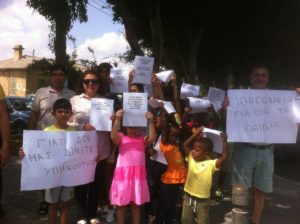 A delegation of KISA, visited the group of refugees who are outside the Cypriot Parliament since the beginning of the week and was informed about the serious issues they are facing. The refugees are protesting against the substantial obstacles they face in their attempt to acquire Cypriot citizenship and ask the government to proceed immediately with the completion of examination of their applications. The majority of the refugees in this particular group have been living in the country for over 10 years with a temporary rather than a permanent protection and residence status.

The status of ‘subsidiary protection’[i], combined with the absence of policies to integrate refugees into Cypriot society, form the greatest obstacles to their efforts to have a decent life. Children and young refugees face the same – and even worse – problems that influence their everyday life, since, although they’ve grown up and/or been born in Cyprus, they live excluded from society, due to the restrictive policies the state follows against them[ii]. Exactly due to these daily problems faced by themselves and their children, the protesting refugees are determined to claim their just demands in spite of any hardship.

We wish to believe that the delay in examining the refugees’ applications (from 5 to 10 years) does not aim to discourage refugees from submitting applications to acquire citizenship. The so-called workload the competent authorities face cannot be the excuse for not examining their applications in a reasonable timeframe. After all, the fast-track process of acquisition of citizenship by non-EU nationals based on economic criteria[iii] indicates that the state has the ability and the power to speed up the entire procedure.

Furthermore, KISA salutes the commitment of the president of the House of Representatives to promote the just demands of the refugees. More specifically, Mr Syllouris, in a private meeting with the representatives of the refugees that took place on Monday (05/09/16), promised he would mediate so that the Ministry of Interior would respond to the demands of the protesters as soon as possible.

At the same time, we categorically condemn the attitude shown by the police when they were informed that the refugees intend to set up tents in the area opposite the House of Representatives. Essentially, the police threatened the refugees that if they set up tents in the area, they will intervene and, in that case, tear them down violently. This particular attitude of the police – aside from being illegal, as it violates the established right of “freedom of assembly”[iv] – is also inhumane given that the refugees, including women and children, are forced to sleep on the pavement at night. It is noted that in the area opposite the House of Representatives, there is sufficient free space in which the refugees can place individual tents, without obstructing traffic or causing any other problem.

KISA considers the refugees’ demand as fully justified and therefore calls for:

[i] Subsidiary protection is inferior to that of the recognized refugee since it is possible to be revoked at any time with real risk of a possible refoulment, it does not give immediate access to valid travelling documents while it deprives the right to family reunification.

[ii] For example, many youngsters, after they graduate from Cypriot universities are plagued by unemployment – like thousands of other young people – but they cannot look for a job abroad because of the restrictions to travel outside Cyprus.