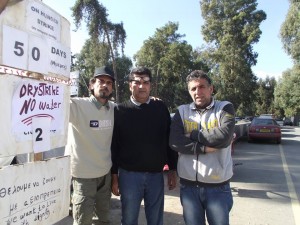 Two recognized refugees, on hunger strike in front of the entrance of the Ministry of Interior, claiming their right to permanent residency status, are now escalating their protest as the authorities continue their intransigence by refusing to examine their just pleas.

KISA – Action for Equality, Support, Antiracism calls on the government to take on its responsibilities forthwith and to respond positively to the just demands of the recognized refugees on hunger strike for such a long period. KISA notes that these people were forced to flee their home countries to seek protection in our country because of the persecution there. This time, however, they are up against a more immediate and serious risk of survival, because the adverse conditions and institutional discrimination that they are facing in Cyprus led them to despair and this dramatic form of protest as the only way out. In this context, KISA stresses that now the issue is not a problem of protection of human rights but one of protection of human lives. [2]

Finally, KISA appeals to the Cypriot society to practically show its solidarity and actively support the recognized refugees on hunger strike by signing the online petition to the Minister of Interior and asking him to ensure that people with international protection status will have immediate and full access to their fundamental and inalienable human rights! [3]

[2] Recognized Refugees. Thursday – 2 January 2014. Open letter to the Minister of Interior of the Republic of Cyprus, Mr Socrates Hasikos. Access via: https://kisa.org.cy/02-01-2014-open-letter-to-the-minister-of-interior-of-the-republic-of-cyprus-mr-socrates-hasikos/