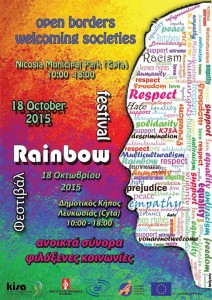 For the last 17 years, KISA has been organising the Rainbow Festival[i], the largest anti-racist multicultural event in Cyprus. The Rainbow brings together Cypriots and non-Cypriots, with the active and colourful participation of migrant and refugee communities, organisations and groups, as well as human rights and cultural organisations, in mutual respect for each other and under a common theme. The Rainbow festival usually takes place in October – November and the entrance is free.

This year’s Rainbow Festival took place on Sunday, October 18 2015, at the municipal park (cyta) of Nicosia. Αs every year, music, songs and dances, exhibitions and information stands, children’s corner, bazaar, food from all over the world, and much more, were included in the festival activities. The theme of this year’s Rainbow Festival “Open Borders – Welcoming Societies” brought us all together to demand open borders and to rethink our borders and boundaries, both physical ones and those socially constructed.

The current refugee crisis, unprecedented since WWII and with the tragic loss of thousands of human lives, makes it imperative for the European Union to open up its borders and welcome refugees, leaving behind its current policy of pushing them out of its fortress and thereby letting them drown in the Mediterranean or meet their cruel death in lorries. The EU should pull together and face up to those of its member states that shy away from taking on their responsibilities, make them pull down the wire and other walls of hate.

At the same time, migrants and refugees already living among us in our societies for many years are confronted with discrimination, exclusion and other forms of borders and boundaries.  The Rainbow Festival concept calls on us to rethink, individually and collectively, these boundaries and borders and to change them.  We need to better understand each other and work together to create multicultural open and welcoming societies in order to overcome discrimination, marginalisation and exclusion of all “others,” including migrants and refugees, and where there will be equality and inclusion of all.

The 2015 Rainbow Festival was organised in the framework of the project “Action Against Discrimnation”, under the European Program PROGRESS, which was implemented by the Cyprus Labour Institute (INEK-PEO) and KISA, in cooperation with the Office of the Commissioner for Administration and Human Rights and the Cyprus Academy of Public Administration.

[i]  For the poster of the festival  as well as for the relevant leaflet, please follow the below links: