Open Letter to the Minister of Interior 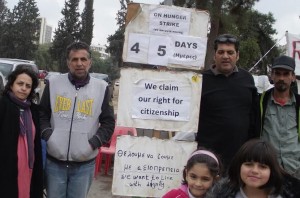 Open Letter to the Minister of Interior of the Republic of Cyprus, Mr Socrates Hasikos

As you already know, we are recognized refugees who are living in Cyprus for more than ten years. As you also know very well, since we have notified you several times in our previous letters, as recognized refugees we are facing a series of essential problems on a daily basis because of our residency status in Cyprus. With this letter, we do not wish to remind you of all those different efforts which we have done, in order to find an appropriate and dignified solution to our problems.

We strongly believe that we have undertaken all the appropriate measures and actions needed in order to solve our problems by ourselves and at the same time we have followed all the necessary procedures when help was needed by the competent authorities.  Unfortunately, all those authorities which had the responsibility to help us solve our problems, ignored us and treated us with undignified ways, ways that would normally cause shame to any democratic country of the 21st century, like the Republic of Cyprus claims to be.

Under these conditions, we believe that the asylum system in Cyprus has failed to fulfill its purpose, which is to protect the life of people in danger. Instead, the existing policies have condemned the life of refugees in permanent precarity and danger. The government of the Republic of Cyprus, which according to the Geneva Convention is fully responsible to help us solve our problems and to protect our lives, has failed to do so. We would also like to make clear once again that we do not ask for money or jobs. We are only asking to give us a residency status (citizenship or long term residency), which will truly enable us to live equally with Cypriot and other European citizens in the European Union, while at the same time it will allow us to leave the country in order to save our lives and families. However, the government of the Republic of Cyprus has been denying this residency status, without even providing us with a straightforward answer to our repeated requests.

As you are also aware of at the moment and for the last 49 days we are in hunger strike in front of the entrance of the Ministry of Interior. However, you never gave us any attention or showed any sympathy for our problems, despite the fact that for almost two months now we are not eating at all and we live in the rain and in the cold. You have treated us as if we are not equal human beings. The government of the Republic of Cyprus has pushed us to die or to commit suicide, which under these conditions seems like our only and best option, since the option to live a life in dignity in Cyprus has been taken away from us. Under these conditions, we prefer to die instead to continue living in the conditions we are living now.

Lastly, after 49 days that we are in hunger strike and since nobody from the government and / or the administration has given any attention to our notes and our demands, we have decided that from coming Tuesday we will stop taking any liquids as well.

We want a respectable end of our hunger strike which we did for a better future and a dignified life. We believe that it is better for us to die here in front of the representatives of the competent authorities rather than to die without any help at home.

If we die, our death will be the responsibility of the government of the Republic of Cyprus and personally you, as you are the responsible Minister for the protection of refugees in Cyprus. Congratulations in advance for our death that will find us anyway away from our mothers and fathers, our sisters and brothers, our friends.

Unfortunately, it seems that we will die in such poor conditions in the name of human rights. Our last demand to the government of the Republic of Cyprus is to deliver our dead bodies to our families and beloved persons.

Thank you for your love and kindness,