Once again, the Ministry of Interior acted deceitfully and unlawfully 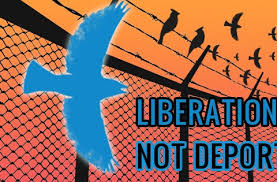 The Republic of Cyprus, in flagrant violation once again of its contractual obligations and the refugee law, the most basic tenet of which is the principle of non refoulement – that is the non-deportation of asylum seekers while their applications are still pending examination, arrested today K.A., who is detained since 17/12/2013 with a view to deportation. This is a family of Kurdish origin from Turkey, including six minors, applying for asylum in Cyprus since 2005.

Mr K.A. applied for asylum in the Republic of Cyprus in 2005, due to his persecution in Turkey, where, as he informed us himself, he had been imprisoned and tortured.  Since 17/12/2013, he is being held under detention and deportation decrees despite the fact that his asylum claim was and continues to be under consideration before the Supreme Court. Mr K.A. has also submitted an application to the Supreme Court against his detention and deportation, which application is also pending. Furthermore, Mr K.A. submitted through his lawyer an application to the European Court of Human Rights on the issues of his detention and the risk of his deportation to unsafe conditions. Nevertheless, Mr K.A. continues to be in custody, while Ms N.A. and their six underaged children, who attend schools in Cyprus, remain in adverse conditions and without any means of subsistence.

Ms N.A., wife of Mr K.A., and their six children protested yesterday outside the Ministry of Interior against the long and unlawful detention of Mr K.A. and their adverse living conditions.Yesterday, the Ministry of Interior committed itself, both to the family and to our organization, to respond to the family by Monday 21/07//2014, on the issue of the father’s detention.

Despite the commitment of the Ministry of Interior, the Aliens and Immigration Unit of the Larnaca Police (YAM), on the instructions of the new Director of the Civil Registry and Migration Department (TAPM), at 05:00 this morning broke down the front door of the family home, while the children were sleeping and arrested both Ms N.A. and five children. The sixth child of the family escaped the scene and nobody knows his whereabouts. During the invasion of YAM in their home, the police took the mobile phones of the family so that they are unable to communicate with any person, agency or organisation and to inform about their arrest.

Moreover, according to the children’s testimony, the police arrested Ms N.A. by grabbing her by the hair and led her and her children by force to the offices of Larnaca YAM. The Social Welfare Services (SWS) were not informed during the family’s arrest, not even during their violent prosecution to the offices of the Larnaca YAM as they ought to have been, as the arrest involved children.

The SWS were finally informed later in the morning and after YAM found out that they could not proceed immediately to the family’s deportation, at which point they asked the SWS to take care of children in order to proceed with  Ms N.A.’s detention. The SWS refused to do so, stating that this would not be to the best interests of the children, who should remain in the care of their mother. Finally, as we were informed a while ago, Ms N.A. and the five children were taken back to their home.

Mr K.A., whose phone did not respond during the arrest of the family, was detained in a police vehicle in handcuffs and seems to have been driven to the airport for deportation without the rest of the family. KISA – Action for Equality, Support, Antiracism categorically condemns the unlawful and inhumane actions of the authorities.

Finally, the handling of this particular case raises doubts as to the government’s consistency and reliability on the recent public commitment that from now on families with minor children will neither be arrested nor detained, as well as TAPM Deputy Director’s statement to handle with respect human rights issues and the contractual obligations of the Republic of Cyprus on issues of detention and deportation of migrants and refugees.