Once again, detainees at Menoyia on protest 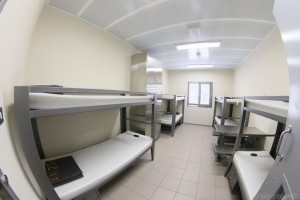 Once again, a large number of detainees, who are in the Detention Centre for Undocumented Migrants in Menoyia, have decided to engage in a dynamic protest as a response to the lack of communication on behalf of the Acting Director of the Civil Registry and Migration Department (CRMD). The detainees demand to meet directly with the Acting Director of CRMD, as they consider him to be the primary decision maker and the key person in determining the outcome of their cases.[i]

At the same time, we note that during the recent visit of KISA’s delegation in Menoyia, it has been ascertained that many migrants are detained illegally, in contrary to the spirit of the European Return Directive (2008/115 / EC)[ii] and the national legislation. The spirit of the Directive entails that detention must be considered as a measure of last resort that should only be applied in the absence of any alternative measures, and only on the basis that the state is ready to promptly implement the deportation of the individual against whom the decree is issued. Despite that, in the detention centre in Menoyia are held asylum seekers, one recognized refugee, persons who are family members of Cypriot or European citizens and individuals who have been detained long term (beyond six months) without the possibility of deportation.

Moreover, during our visit, we had a conversation with detainees who have been in Cyprus for more than 20 years, having arrived as children with their families and graduating from Cypriot schools, and they are at this point classified as undocumented migrants in the country and they have been detained on the basis of being “unwanted migrants” as the state has failed or does not want to provide decisive solutions to their issues. Additionally, it has been found that many people who have been held in detention have serious health problems that have either been caused or / and aggravated by the detention conditions and the problematic accessibility to the health system. Lastly, some of the detainees have reported the use of violence against them by certain officers of the Centre.

[i] See the relevant letter to the Acting Director of CRMD: http://goo.gl/hPZPyY