Press release on the occasion of the World Refugee Day

KISA demands a comprehensive policy for reception and integration of refugees. 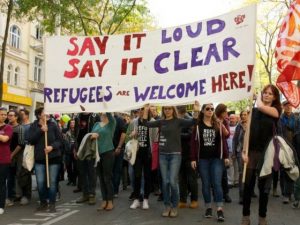 In light of the International Day for Refugees, KISA – Action for Equality, Support, Antiracism reports and condemns the continuation of the extremely serious problems that refugees face in Cyprus, both in relation to the unacceptable and inhumane reception conditions, as well as access to their rights and allow for their equal participation in society.

Over the last few years, with the economic crisis and the intensity of subsequent problems, the intense and targeted demagoguery about ‘cushy benefits’ and their acceptance – without judgement – by society, the institutional discrimination in all sectors – from healthcare, employment to social provisions and others, a hostile environment has been created towards refugees and asylum seekers, characterised by xenophobia and racism. This is the environment that the government uses to legitimise its hostile attitude and indifference towards the problems and needs of refugees.

As indicated once more a few months ago by the tragic situation at the Asylum Seekers’ Reception Center in Kofinou, with inhumane living conditions and lack of sanitation and their impact on the health of hosted refugees, especially young children and other vulnerable groups, the Cypriot government continues to apply an ineffective and inconsistent policy for reception and integration of refugees and asylum seekers. A policy that contradicts not only the basic obligation the countries has towards the European and international treaties it has signed, but also violates basic human rights and principles, like solidarity and support for people who are forced by war and persecution to ask for protection from our country.

A policy according to which refugees don’t have access to equivalent, fair and active participation in society. The policies and practices of the Republic of Cyprus for refugees aim to deter refugees from coming to Cyprus and to pass on the message that refugees are not welcome, by preventing their access to basic rights and rendering their integration impossible. As a result, even in cases where they are granted protection, refugees are either forced to move to other European countries and remain there without a residence permit or to apply for international protection again in these countries.

Particularly indicative of the government’s policy and attitude is the case of the stateless Kurdish refugees from Syria who have been protesting outside the Presidential Palace and the Ministry of Interior for over 16 months now against the continued denial of the Ministry to recognise them as refugees and grant them Cypriot citizenship. Today, 20/06/2018, with the intervention of the President of the House of Representatives and his personal guarantee to take initiative regarding communications with the government with a view to satisfying their demands, the protesters decided to cease the protest. In case this attempt also fails to bear fruits, the protesters declare they are determined to continue and intensify their protest.

KISA also reports and condemns the continuation of this policy with regards to the management and handling of unaccompanied refugee children who, as a particularly vulnerable group, should be handled with extreme care and protection. According to recent statements by the head of the Office of the International Refugee Organisation (IRO), the Cypriot government in collaboration with the IRO in Cyprus are planning the creation of a detainment camp for unaccompanied refugee children in Zygi. Therefore, instead of decentralising refugee hosting spaces to local communities with easy access to basic institutions and services, such as schools, hospitals, social and other basic state services but also supportive NGOs and areas for recreation, the government exacerbates their isolation and exclusion, such that they remain invisible and excluded from Cypriot society.

The small percentage, especially of Syrian refugees, that actually are granted recognised refugee status continue to face several serious problems with their integration into society, particularly relating to elementary rights, like employment, training, and education, with the lack of recognition for their professional qualifications, so that they could free themselves from unemployment and their dependence on social provisions, to rebuild and continue their lives with decent living conditions and enjoyment of their rights.

Given the opportunity of today’s International Refugee Day, which was set to celebrate support and solidarity with refugees, KISA urges the Republic of Cyprus to proceed immediately with the following: