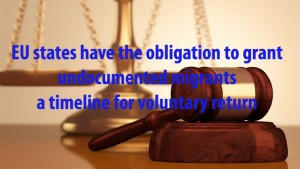 KISA – Action for Equality, Support and Antiracism, has from the beginning of Mr Hasikos’ appointment as the Interior Minister, raised, inter alia, the matter relating to the implementation of the provision in the Returns Directive [i]on the obligation to inform non EU citizens about the intention to terminate their residence permit as well as to grant irregular migrants a time limit for voluntary departure from the Republic. Three years later, and while KISA’s suggestions have not been taken into consideration, the Supreme Court has essentially confirmed the correctness of these suggestions.

More specifically, the Supreme Court has in its Matondo Adam, v.  The Republic, dated 25/11/2015 decision[ii], quashed the detention and deportation warrants against Mr. Adam Matondo, citizen of the Congo. This judicial decision, was based on the fact that, the relevant authorities failed to abide by Cap. 105 of the Alien and Migration Law and Directive 2008/115/EC, in relation to grant the stated person a time limit for voluntary departure, prior to the issuing of the detention and deportation warrant against him.

KISA considers that the aforementioned decision by the Supreme Court is of particular significance and calls upon the Civil Registry and Migration Department, to adjust the practice of issuing detention and deportation warrants on the basis of the specific provision of the European Returns Directive. It is noted that, the spirit of the directive in question denotes that the deportation and detention warrants suggests that deportation and detention must be considered as a measure of last resort that should be implemented only once the possibilities for voluntary departure have been exhausted, while at the same time the person against whom the warrants are issued must be provided with the right for judicial review.

Further, we are convinced that the replacement of the intransigent attitude possessed by the relevant departments of the Republic, along with the spirit of cooperation and good will, will restrict, on the one hand, the suffering of people against whom illegitimate detention and deportation warrants are issued, and it will lead to the expenses reduction of the state.

Finally, we call upon the Minister of Interior, following the aforementioned decision by the Supreme Court, to implement his commitments toward KISA even after a period of 3 years has elapsed. It is noted that, initially the Interior Minister had committed to the implementation of our suggestions however this commitment has not been realized following an objection of the then Director of the Civil Registry and Migration Department, Ms. Shiakalli.