No to the criminalisation of women’s reproductive rights 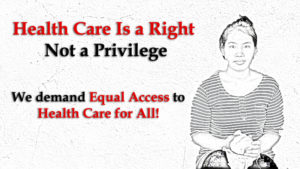 On the 18th of July, Ms Cyrel Reyes[i] visited the hospital due to a haemorrhage and additional health problems that ensued after a miscarriage she had earlier in the same day[ii]. The hospital staff examined her, but also alerted the police, which arrested her, claiming they did not believe her account that she had a miscarriage. Since her arrest, Ms Cyrel Reyes remains in custody. Furthermore, following her arrest, the media slandered her with articles and titles describing her as an “infanticide” for allegedly having had an “illegal abortion.” The accusations against Ms Cyrel Reyes are in no means justified, especially considering the minor offences she was charged at court.

More precisely, on the 25/07/2016, Ms Cyrel Reyes was charged for the minor offences of “concealment of child birth,” “participating in a conspiracy with another person (for the concealment of child birth),” and “overstaying” in the Republic of Cyprus (RoC). It is evident from the charges pressed against her that the accusations the media and a large portion of the public opinion laid against her are not valid. It is also evident that such charges result from the reality the great majority of migrant women and especially domestic workers face in the RoC. More specifically, the vast majority of migrant women have no access to health care and especially antenatal care and screening, while for undocumented migrant women visiting a hospital, even for an emergency and even when they pay, invariably leads to their arrest, detention, deportation, and sometimes, as in the case of Ms Cyrel Reyes, even to their criminal prosecution.

Moreover, the fact that Ms Cyrel Reyes was reported to the law enforcement agencies by health professionals and the way she has been publicly slandered are indicative of the Cypriot society’s attitude towards the right of women in general to have control over their own bodies and decide for themselves. The reality is even harsher for migrant women as racism intersects with sexism in the construction of the “dangerous other” and this is evident in the case of Ms Cyrel Reyes. In a deeply racist and sexist society where women are being denied their basic human right to body autonomy and migrant women cannot even access health care, it is unfortunately no surprise that a migrant woman is being slandered in such a way.

It must be clear that when women and especially migrant women have no antenatal screening/ care and/ or resort to unsafe abortion methods, and/ or have no medical care after a miscarriage, this is so because they are forced to by the policies and practices of the state, which deprive them of the right to healthcare, as well as to the ownership and control of their own bodies.

In actual fact, Ms Cyrel Reyes is being charged for being poor, undocumented, migrant, and a woman and, therefore, not privileged enough to have access to health care and recognition of her own agency as a subject and her right to body autonomy.  Therefore, we call on:

[i] Please note that in an effort to protect her anonymity, Cyrel Reyes is a pseudonym.