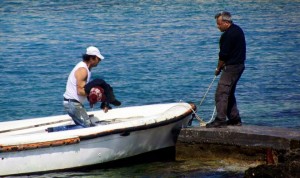 In less than ten days, about 1,400 people, among them many women and children, were drowned in the waters of the Mediterranean Sea in their attempt to seek safety and protection in the European Union.

It is more than evident that the policy of deterrence of refugees and migrants that the EU has been following in recent years has, on the one hand, transformed the Mediterranean sea into a graveyard for the desperate aspiring travelers while, on the other, the majority of the ‘lucky’ ones, those who finally manage to survive the long journey, are stack in concentration camps that the European states call reception centers, in detention centres for “prohibited” migrants or they are simply living without any real prospect or hope for their future, mainly due to the absence of essential integration policies and equal participation in society.

The European Union’s effort to prevent the entry of migrants and refugees into European territory is quite futile. As long as armed conflicts and persecutions, political instability, poverty and misery in a vast area, from Africa to Syria, Iraq and Palestine and beyond, continue and intensify, the number of migrants and refugees will be increasing since, in a desperate attempt to survive, they are forced to take the risk to cross the watery grave of the Mediterranean Sea.

According to the High Commissioner for Human Rights (OHCHR) of the UN, today the number of refugees is the largest in the last two decades, while estimates indicate that this number will continue to grow in the coming years.

instead of facing up to the daily and increasing number of tragedies at its borders based on international law and the principles that the Union itself advocates, the European Union has announced the adoption of the  so-called 10 points for migration, which essentially focus on strengthening existing mechanisms and operations (Frontex, Triton, Poseidon, Eurojust, Eurosure) to patrol the borders of Fortress Europe, combating smuggling and trafficking rings and further strengthening policing duties of immigration from countries of origin. This policy, without the adoption of policies for safe access of refugees to EU territory has not only been proved to be ineffective but it also makes the EU equally responsible for the current human tragedies woefully parading on our tv monitors. The EU should perhaps spell out that the Sudanese, Eritreans, Syrians and others who want to save themselves – trying to reach the shores of Europe, are condemned to death!

Taking part in the European and global outcry or the appalling loss of life, KISA raises its voice too, condemns this policy and calls on the EU to, rather than building walls and erecting barbed wires in order to exclude these people from its borders, to rise to the occasion and put the declarations into praxis and to finally take effective action so that we stop being witnessed to such tragedies.

In this context, the main duty of the EU and every individual Member State must be to ensure the safe access of migrants and refugees to EU territory.  In addition, each Member State, under the supervision and financial support of the EU must set up structures that will ensure high standards in the procedures of asylum reception, examination of asylum applications and integration of migrants and refugees in European countries.

When the EU, leaving the crocodile tears and grand proclamations aside, takes on its responsibilities and adopts policies and measures to effectively tackle this unprecedented humanitarian crisis and begins to treat migrants and refugees based on the values ​​and principles of its establishment, such as respect for human life and dignity, freedom, democracy, equality, the rule of law and respect for human rights, then indeed the declarations,  policies and practices will become meaningful and consistent with the universal values ​​on which the European Union  is founded.