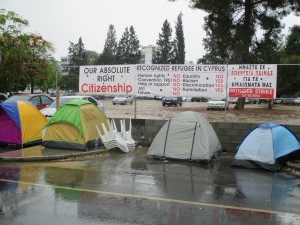 The (10) recognized refugees from Iran, the majority of which have been living in Cyprus for the past 14 whole years, are asking the access to basic rights and specifically to the right of citizenship, namely the acquirement of the Cypriot citizenship. The recognized refugees believe that the concession of the Cypriot citizenship is the only way out the vicious circle of exploitation, marginalization and exclusion, in which they find themselves today.[i]

At the same time, the fifty-six (56) stateless Kurds from Syria, which belong to the ethnic group of Ajanib [ii]and have been waiting for many years the examination of their applications for asylum, are asking to be granted refugee status or at least subsidiary protection. However, in case they are granted the subsidiary protection status, then they will ask for this to be accompanied by a written commitment for granting them the right of family reunification and the right of acquiring travel documents, similar to the ones of the recognized refugees, so that they can travel freely and seamlessly to other member states of the European Union, where members of their family live.

The just demands of the recognized refugees from Iran and the stateless Kurds from Syria stem from the will of these socially excluded groups of the population, to be able to live equally with the rest of the citizens of the Republic of Cyprus and the European Union (EU) in Cyprus or in any other member state of the EU. The refugees from Iran and the stateless Kurds from Syria ask to be granted a permanent residence permit, through which they can work and live with dignity, without depending on public subsidies, but also without being faced with any institutional discrimination and unequal treatment. However, the government of the Republic of Cyprus, until now denies giving a clear answer to their repeated calls and grant them with a permanent resident permit to the refugees and the stateless.

KISA- Action for Equality, Support, Antiracism calls on the Ministry of Interior to prove in practice that Cyprus consists of a multicultural society, which is able to embrace refugees and stateless people as an integral part of it, supporting in practice their just rights and ensuring full and equal access to these excluded groups in social, economic, and cultural rights such as the right of citizenship and international protection.

Finally, KISA believes that based on the refugee law but also on the practice that the rest of the EU member states follow, the stateless Kurds from Syria have the right to be granted recognized refugee status. Furthermore, KISA believes the request of the already recognized refuges from Iran to acquire Cypriot citizenship, is a just demand. In view of the above, KISA calls on the Cypriot government and specifically the competent Ministry of Interior to immediately proceed to the examination and the meeting of the demands of these two social groups.

Notes to the editors:

[i] It is reminded that at present, the competent authorities of the Republic of Cyprus grant temporary resident permit for (3) years to the recognized refugees, which can be then renewed. In the meantime, if the recognized refugees leave Cyprus and reside abroad for more than three (3) months, then the resident permit in the island is automatically cancelled. If they go to another country, they can only reside there only with a residence permit of a three (3) months duration, after the expiry of which either they have to leave the country or they have to submit a residence permit with limited access to their rights, under the status of migrants and not of refugees. Aside of all these, the recognized refugees cannot be granted permanent resident permit, even though the status of long-term residence, which is foreseen by the European legislation, is almost impossible to be granted to refugees, since they do not possess the adequate financial resources required by the Cypriot legislation, especially after the intensification of the economic crisis, the rising unemployment, the lack of social inclusion and non-recognition of professional qualifications of persons with international protection. Consequently, the only residence status that can provide them with real security and a decent living is the acquirement of the Cypriot citizenship, through which they can have fully access their rights and seamlessly seek for work abroad.

[ii]   The regime of Bashar al-Assad denies the granting of the right of naturalization to the ethnic group of Ajanib- stateless Kurds from Syria. The members of this specific social group are therefore lacking over time the right to naturalization and as a consequence, all the related social and political rights. Recently, the regime of Bashar al-Assad allowed the naturalization of the Ajanib that are in Syria. Thus, the members of the aforementioned social group that are out of Syria and in the mentioned period of time could not naturalize, are stateless. In Cyprus, the specific group consists of precisely fifty-six (56) people that have already submitted asylum applications (a total of 27 cases). In all the member states of the European Union, the people that are in a position to prove that they belong to the Ajanib group of stateless Kurds from Syria, are automatically granted with the recognised refugee status. For further information see: