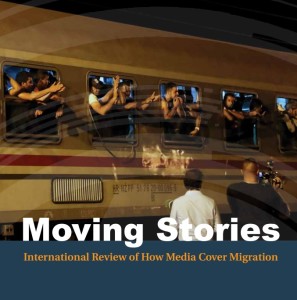 An international report on media and the global migration and refugee crisis, issued to coincide with International Migrants Day (December 18), says journalists often fail to tell the full story and routinely fall into propaganda traps laid by politicians.

The report, Moving Stories, is published by the Ethical Journalism Network and reviews media coverage of migration in the European Union and in 14 countries across the globe.

“Around the world media coverage is often politically led with journalists following an agenda dominated by loose language and talk of invasion and swarms,” said Aidan White, EJN Director. “But at other moments the story is laced with humanity, empathy and a focus on the suffering of those involved.”

Missed Opportunities: How journalists and media in Europe failed to raise the alarm about an imminent influx of refugees fleeing war in Syria and Iraq, even though the story was there to be told a year before the crisis broke in 2015;

Hate-Speech: How outrageous anti-migrant or anti-Muslim statements by politicians like Donald Trump in the United States and some European leaders fuelled increasing public concern and hijacked media coverage;

Falling Standards: How media fail to provide detailed and reliable information about the refugee crisis because of a lack of editorial resources or the presence of well-informed journalists able to provide in-depth and sensitive reporting;

Sensationalism: How much journalism is driven by hyperbole, intolerance and distortion with media in confusion over what are the correct terms to use to describe migrants, refugees, and asylum-seekers.