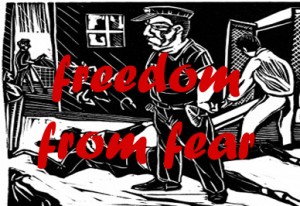 It was with immense sadness that we were informed that on Saturday, 26th of September 2015, another young migrant [1] from Philippines, Mrs. L.H., lost her life in an attempt to avoid an arrest by the Immigration Office during police raid in her house. According to information featuring in the media[2] and based on our own information, Mrs. L.H. was killed in an attempt to leave the apartment where she lived, when the police entered by force during an investigation for undocumented migrants. Specifically, Mrs. L.H. tried to avoid the control using the window on the back side of the building and as a result, to fall into the void and be killed.

KISA, Action for Equality, Support, Anti-racism, denounces publicly the actions of the police to enter the apartment with violence and without relevant warrant, fact that, in combination with their subsequent behavior, seems to have contributed to the decision of Mrs. L.H. to escape her place of residence in such way, resulting in her death. Furthermore, questions have been raised in relation to the reaction of a private clinic in Nicosia where Mrs. L.H. was transferred, refusing to provide her medical care or calling an ambulance.

Mrs. L.H. was in Cyprus since 2009 and for four consecutive years she was working as a domestic worker. In 2013 her four-year residence and work permit expired and the competent authorities refused to renew it, in accordance with their policy at the time. As a result, Mrs. L.H. remained in Cyprus without legal residence status during the last two years.

According to KISA’s information, on the evening of September 25, at around 8:30, the partner of the young migrant, Mr. F.K., heard violent knocks on the door of the apartment and at the same time he saw Mrs. L.H. leaving terrified the kitchen and going to the bedroom. Then he realized that three police officers were out of the apartment knocking on the door and shouting to open to them. Before Mr. F.K. realized what was happening, one of the officers entered the apartment through the window and after immobilizing the man; he opened the door to his colleagues.

Then, while Mr. F.K. was immobilized on the ground, two of the officers inspected the other rooms of the apartment. When they realized that the bedroom door was locked, they tried to enter it again by force, pushing and tapping the door, but did not succeed. Then they asked Mr. F.K. to open it, claiming that there was noise coming out of the bedroom. But the door was locked from the inside and thus, Mr. F.K. could not open it. The police officers remained in the apartment for about half an hour and after having ascertained that Mr. F.K. has a legal residence status in Cyprus, they left the apartment.

When the officers left, Mr. F.K. called Mrs. L.H. to come out of the bedroom, but with no response. Then, terrified, he broke the door and was surprised to discover that Mrs. L.H. was not there. Immediately he called upon for help from familiar people residing in the area to find her. Approximately 45 minutes after the entry of the police into the apartment, they found her covered in blood in the basement of the building.

Mr. F.K. immediately transferred Mrs. L.H. to a private clinic in a private vehicle, but the hospital staff refused to handle the case saying that they did not have such capacity at the time. Then, Mr. F.K. transferred her in a private vehicle to another clinic. There, the doctors examined her and, having realized how serious her situation was, they called an ambulance in order to transfer her to Nicosia General Hospital. After about half an hour Mrs. L.H. was transferred by ambulance to Nicosia General Hospital, where, despite the care provided, she died.

In light of the above, KISA calls: