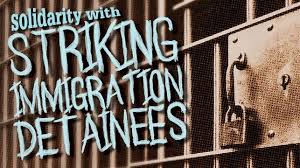 Seven out of the eight prisoners are currently participating in a broader group of detainees who are in a hunger strike for almost two weeks now. Despite the fact that the family of one of them still resides in Cyprus, he continues to be held for deportation, without taking into consideration that his children are minors, and this will led to the disintegration of the family and the violation of the children’s rights. In addition, another two of the hunger strikers are asylum seekers and the examination of their cases is pending before the Supreme Court.

The sixth prisoner visited by the representatives of KISA is married with a citizen of the European Union (EU) and they have children in Cyprus who are minors, but despite this is detained in order to be deported.

The seventh prisoner is still been held, despite the fact that the authorities of his country are refusing to issue him travel documents and cannot be deported since his country of origin does not accept him. Also, due to the inadequacy of the examination procedures of asylum seekers, this prisoner was unable to persuade the authorities for the need to grant him with international protection status, nor to file an appeal to the Supreme Court.

Today, he continues to be held on long-term detention, despite the fact that he is facing serious health problems. More particularly, a year ago, the former Director of the Mennogeia Detention Center (against whom disciplinary action has already been taken, amongst other, for inhumane and degrading treatment of detainees, following the investigation of the Law Office), has sent a letter to the Administration of the Aliens and Immigration Service (AIS), calling for the release of this prisoner, because “he suffers from serious heart problems” and “any further detention under the same conditions, can lead to his death with a negative impact on the Police and the Republic of Cyprus”. Even worse, the senior police officer mentioned in his letter that “any medical accommodation costs, medicines and surgery will be paid by the State, since the Larnaca General Hospital has already requested a confirmation that the above mentioned person is a prisoner in order to receive free health care”. According to the former Director of the Mennogeia Detention Center, “if released, he will have to arrange on his own for his health”. In fact, the detainee was released just one day before his scheduled heart surgery and while he had already been admitted to the hospital. As a result of his “release”, he was unable to carry out the surgery, since he was not entitled to free medical care and as a prisoner could not raise the money to pay the costs. Two months later, he was arrested again by the AIS and is detained since then in the same conditions.

Finally, the eighth prisoner’s application for asylum was rejected because the authorities felt that he has not been a victim of torture in his country of origin, as he claims. Yet, this prisoner faces serious health problems as a result of the torture suffered in the past. In fact, he is now in a risk of losing his leg, as “there are fragments of firearm bullets”, based on the examination made in a public hospital of the Republic of Cyprus.

KISA calls for the immediate release of the eight prisoners for humanitarian reasons and denounces their illegal detention, as they face serious health problems. In line with that, it is obvious that, either the effective access to their legal remedies has not been ensured (e.g. no information on the potential of an appeal to the Supreme Court and pending appeals before the Supreme Court or the European Court of Human Rights), or the asylum applications submitted have not been examined properly (e.g. non-referral of applicants to an independent medical board, despite the existence of fragments of firearm bullets in their bodies for years).

Finally, KISA believes that the effective and long-term approach towards resolving existing problems regarding the detention and deportation policies of undocumented immigrants, requires the full and effective implementation of the provisions of the Directive 2008/115/ΕΚ, under which the detention should take place only if deportation procedures are implemented immediately, i.e. when all other means have been exhausted.