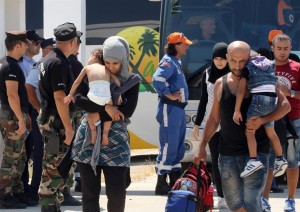 According to what has been reported so far, at 5.00am on Sunday, 6 September, following the rescue operation coordinated by the Joint Rescue Coordination Center (JRCC), 114 refugees – 60 men, 19 women and 35 children – arrived on the territory of the Republic of Cyprus . The refugee rescue operation began at approximately 8.25pm on Saturday, 5 September, when the JRCC received information that a boat was sending a distress signal because of problems with its engines. Of the rescued refugees, 87 were transferred to the temporary refugee camp at Kokkinotrimithia, those who applied for asylum were sent to the Refugee Reception Center at Kofinou, while others – in particular unaccompanied minors– were placed in the care of the Welfare Office.

KISA welcomes the fact that the Cypriot authorities appear to have acted propmptly and in a coordinated manner in the rescue of all the refugees who were on the vessel in difficulty. We also welcome the fact that the authorities showed no delay in organising the necessary infrastructures to cover the immediate needs of their reception.

At the same time, we believe it would have been better for all the rescued refugees to have been taken directly to the Refugee Reception Center in Kofinou. In our view, this solution would have provided more appropriate living conditions and would have contributed positively towards addressing their concerns as to whether or not they would submit requests for asylum. This solution would also have been more economically advantageous. In order to support the fact that not all of the refugees were transfered to Kofinou, the competent authorities have invoked the legal framework for operating the Reception Center at Kofinou, according to which only asylum seekers can be hosted there. This is unsatisfactory, since many other refugees have been received or are being received there in derogation of the relevant legislation.

Furthermore, KISA wishes to express its disappointment and strongly protest at the fact that during a visit of a delegation from our organisation to the temporary refugee camp at Kokkinotrimithia on Sunday, the competent authorities did not allow to our members to see the rescued refugees and talk with those who would have wanted to. It should be remembered that the rescued persons who have been received have not been detained and therefore we believe that the refusal of the authorities to allow us access and contact with these people not only deprives them of the freedom of communication, information and support, but is also illegal and arbitrary since it is not based on any legislation. In order to avoid any unnecessary disruption, KISA respected the decision of the Head of the Civil Defence that “no visits will be allowed on the first day”. However, we expect that from today the situation will change and unobstructed visits and communication with the refugees will be allowed, and that in the future communication will be ensured immediately from the outset.

Also, KISA has raised its serious concerns in writing to the Minister of Interior regarding the fact that a particular person continues to be present and to act at the Kokkinotrimithia refugee camp, while this person’s past violent and inappropriate behaviour, indicates beyond any doubt that he should not bepresent there. We expect that following the intervention of the Minister, the exclusion of this person from that location will be ensured.

In light of the above, we call on the competent authorities:
– To assure the refugees that if they wish to proceed with asylum requests, these will be examined fairly and recognised refugee status will be granted to those who are eligible, rather than just subsidiary protection in line with the authorities’ practice in recent years. Otherwise, we believe that the majority of the refugees will not proceed with asylum requests with whatever this entails for the refugees themselves, while it will also constitutes a violation of the international obligations of the Republic.
– To assure the refugees that the Republic of Cyprus will take all necessary measures to ensure their smooth integration into society and their equal participation in it.