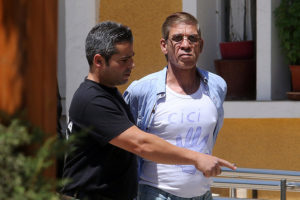 Today, 21/09/16, the judicial proceedings in relation to the deportation of Mr Seif el-Din Moustafa Imam’s to Egypt were scheduled. During his appearance in court Mr Seif el-Din reported that he has been subjected to systematic physical and psychological violence in the prison so that, as he believes, he agrees to his extradition to Egypt. Further, Mr Seif el-Din claimed that part of this inhuman and degrading treatment in the prison has been his continuous detention to solitary confinement without any particular reason. In fact, Mr Seif el-Din submitted to court and handed to the police a bag containing a narcotic substance which he transferred from the prison, in an attempt ‘to strengthen his complaints’.

On the 18th August 2016, the court rejected the admittance of a testimony given by Cambridge University professor, Dr Emile Joffe, in relation to the internal order, security and human rights in Egypt, and ordered during today’s hearing either for a new expert witness or to proceed with the conclusive statements. The recent events in Egypt as well as the renewed effort to suppress all those who are against the current regime[i] made the arrival of a human rights expert witness from Egypt impossible. Despite this, due to unavailability of Mr Seif el-Din’s lawyer today’s hearing was adjourned.

At the same time, KISA expresses its strong concerns in relation to another development that seems to be directly connected to this case. Journalist, Marios Demetriou, who has on several occasions during the last few years been awarded for his work, has been discharged from newspaper “Simerini”, member of DIAS publishing house in which he has been employed for almost 40 years with the pretext of a ‘decrease of turnover’ and for ‘reorganization’ purposes of the publishing house.

In the past, Mr Demetriou has been pressured by DIAS’ owners leading to his self-censhorship. One of the main reasons for this has been the fact that he was constantly involved with matters pertaining to immigration, asylum, trafficking in human beings and has been promoting KISA’S work  as well as other NGOs’. In fact, in 2011, his newspaper column was suspended for 2 months on the pretext of an article on matters concerning our organization. Given the aforementioned, and on the basis of related information, we have been led to the conclusion that Marios Demetriou has lost his job because he did not give in to the pressure posed by the Publishing House to proceed to self-censorship.

The decision to discharge the abovementioned journalist is directly connected to Mr Seif el-Din’s case and more particularly to the relevant article[ii] in dated 19 August 2016. The article was concerned with the said case and the incomprehensible decision of the Nicosia District Court to reject evidence[iii] by the independent expert witness Dr Emile Joffe as far as security and human rights in Egypt are concerned.

KISA expresses its concern in relation to the court’s decision not to accept the evidence provided by the Professor. In our opinion, this decision served as a way to avoid the evaluation of the content of the report and, by extent, with the substance of the case, which is whether Mr Seif el-Din faces any danger to be subjected to torture or other degrading treatment in case he is returned to the Egyptian authorities.

KISA expresses its concern in relation to Mr Seif el-Din’s complaints concerning his treatment in the central prison. On this basis, we call upon the Minister of Justice, the Attorney General and the Ombudswoman in her capacity as the National Authority Against Torture, to investigate the complaints and take all necessary measures for Mr Seif el-Din’s protection.

Further to this, in light of the significant worsening of the human rights situation in Egypt, we call upon the government to re-evaluate its intentions for Mr Seif el-Din’s return to the country. Finally, KISA condemns every effort that seeks to censor journalists and calls upon the relevant authorities to intervene so that the freedom of the press is safeguarded.