KISA under prosecution again: The police “stood by us and they are all our children», ΚΕΑ 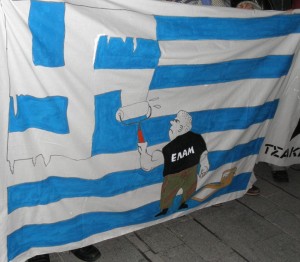 On 5 November 2010, people who participated in the racist march ostensibly against “illegal migration” held by the Greek Resistance Movement and other nationalistic-chauvinistic elements attacked the antiracist Rainbow Festival, in front of the police who just seemed to watch the events in apathy. The tragic account of the attack: Among others, an attempted murder with knife against a Turkish Cypriot musician and beating of another Turkish Cypriot musician, assault of a number of migrants, in many cases with serious bodily harm, risks to the bodily integrity of many children and women, as well considerable material damages.

The official slogans of the “peaceful”, according to the police, march were against Turkish Cypriots, Jews, Muslims, people under international protection, irregular migrants and, of course, against KISA’s activists under the slogan “axe and fire to KISA’s dogs”.

Not only did the police not manage to deter the violence and protect the victims, but they did not even make a single arrest in relation to the above crimes. Neither could they evoke surprise as an excuse, since in a letter sent to us on 5 November 2010 by the Larnaca District Office, it was stated that the Police Chief of the Larnaca Police Station was against giving permission to hold the Festival because “a peaceful protest march at Europe Square will be held at the same time and there might be incidents”. With this attitude, it was not a mere coincidence that the President of the Greek Resistance Movement stated the day after the events in Simerini newspaper that, in relation to the Police, “they stood by us and they are all our children and we protected them”

The day after the events, KISA issued a press release wherefrom it called for an independent inquiry about the events at the Finikoudes area. In view of information we had that at least one Officer of the Larnaca Police Division was involved, we asked for a criminal investigation by the Criminal Investigation Office at the Police Headquarters. Unfortunately, none of the above has taken place and the result is that the victims of the racist violence are victimised once again, this time by the state and the government, with first and foremost KISA’s executive director, Doros Polykarpou, whom the police called five months after the events to inform him that they would charge him for “rioting and participating in an illegal assembly with other 600 people»!

Almost five months after the tragic events, which brought to the fore the cruel reality of the racist discourse and racist violence, and as members of the police, sometimes top Officers, have repeatedly been involved in a number of criminal cases, the police have found in the persons of human rights defenders “the easy solution” for reversing its bleak image and the low esteem it enjoys in society.

These tactics, so dear to the police, are not new as this is the sixth time that they prosecute Doros Polykarpou, trying to tarnish his character and integrity, in a desperate attempt to intimidate and silence KISA, an organisation that for almost 14 years now envisions and struggles to defend and protect the rights of migrants and to contribute to the creation of a society where there is respect of human rights, a multicultural society, really free from racism and discrimination, with mutual respect and  appreciation and solidarity among all its members, irrespective of racial or ethnic origin, religion or beliefs, gender or sexual orientation or any other diversity. In addition, the intimidation tactics against KISA are now confined to KISA’s executive director but they spread to a number of other members and friends of KISA, which is in the process of drafting a special report which will soon be publicised and submitted to competent agencies as well as organisations for the protection of human rights, both in Cyprus and abroad.

KISA and many of those present there, knowing that Doros Polykarpou worked very hard that night, by putting his own bodily integrity to risk, to protect the victims of racist violence, along with many others who will testify in court when the time comes, have no doubt that this attempt of the police will be met in the same way as all previous ones.

It is noted that Doros Polykarpou is recognised and has already been listed as a human rights defender at risk by a number of well-known and prominent international and European human rights organisations (Frontline, Amnesty International), as well as in a number of reports about the human rights situation in Cyprus.

Once again, KISA underlines that neither the criminalisation of its leadership nor the attempt to intimidate and silence it will lessen its determination to continue its work for defending and upholding the human rights of migrants or to continue to struggle with all its might against racism and discrimination.

Therefore, KISA calls on the government to consider its responsibilities for the rise and perpetuation of the racist and chauvinistic climate that is being developed and threatens to prevail in the Cypriot society, and to revert, now before it is too late, to the principles it propagates for a just society. In this framework, KISA calls on the government and the Attorney General to ensure that there will at last be an independent inquiry about the Finikoudes events and to intervene in order to terminate every action to criminalise the antiracist activists.

We also call on all antiracists and anti-nationalists, democratic NGOs and civil society, all democratically-minded people and agencies to rally around and for solidarity with KISA and its leadership to ward off this attempt too, which is aimed not only against the Organisation but against the rights of all of us.