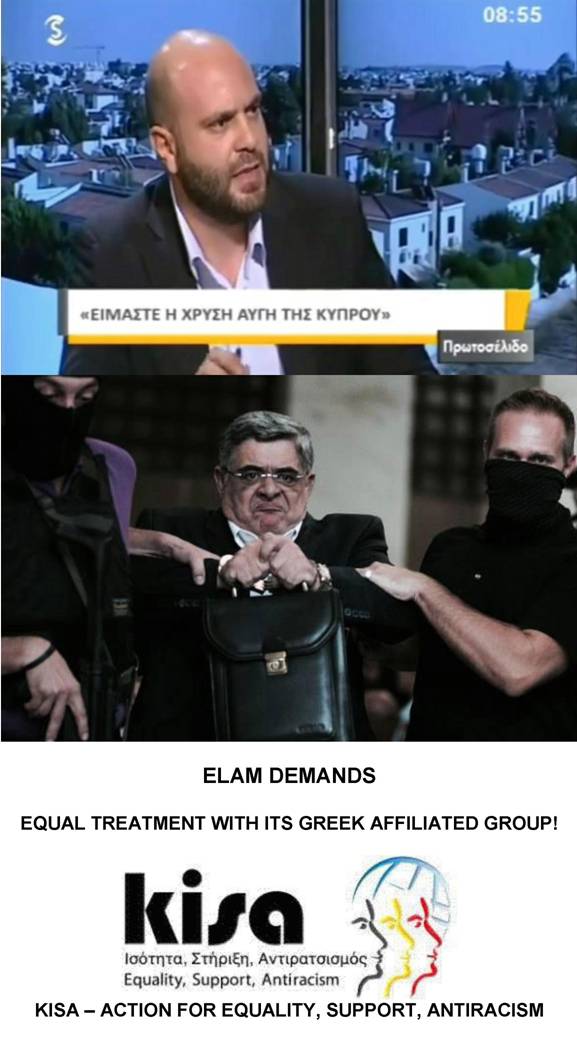 KISA – Action for Equality, Support , Antiracism strongly and unequivocally condemns the planned for today march organized by the National Popular Front (ELAM) in Nicosia, seeking the release of the arrested members of the criminal fascist organization Golden Dawn in Greece. [1]

ELAM has not as yet missed any opportunity to reaffirm its ideological and organizational affinity to the neo-Nazi organization in Greece, laden with a series of criminal acts, which include, inter alia, setting up a criminal organization, attempting to abolish democracy and using political violence, carrying and possession of weapons, committing racist attacks and premeditated murder, extortion and arson, counterfeiting and forgery, participation in human trafficking and money laundering. [2]

On 18 September 2013, the day after the brutal murder of Paul Fyssas, the representative of ELAM, who was a “guest” on the main news of Sigma TV, maintained previous statements and declared uninhibitedly that “We are the Golden Dawn of Cyprus”, continuing to identify ELAM with [3] and more shamelessly to defend the criminal action of the Golden Dawn in Greece. [4]

KISA believes that a society, which aspires to the protection of human rights as a supreme principle and value, and declares observance and adherence to legality, must protect itself and its members by prohibiting, inter alia, events of identifying with and supporting criminal actions and ideologies as the planned march of Elam.

At the same time, KISA stresses that neo-Nazi organizations like  ELAM can no longer hide behind the supposed “right to freedom of expression”, which in reality   is abusing in the most brutal way to essentially attack and abolish democracy and human rights of all members of  society.

KISA believes that the continued insolence demonstrated by ELAM, which is largely due to the tolerance and inertia that have for years characterised the position of  the competent authorities of the Republic of Cyprus, is a major challenge not only to public institutions but for the society as a whole. [5]

Finally, KISA reaffirms once again that it will continue to resist the phenomena of nationalism, racism and fascism, by fighting discrimination and xenophobia, promoting the respect of diversity and multiculturalism, as well as the protection and advocacy of human rights.