KISA is concerned about the strengthening of nationalistic, racist and Neo-Nazi policies in the Cypriot society. 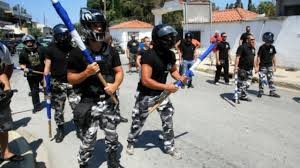 KISA states its deep concerns as regards the result of yesterday’s parliamentary elections, on the basis of which it secures, for the first time, the parliamentary representation of neo-nazi  group ELAM. Furthermore the relocation of part of the electing body towards those political powers that embrace racism and nationalism is also of particular concern, as well as the percentage of all of those whose abstention from the electoral process seem to have severed their relationship with the existing political system. [1]

KISA points out that the results of the election and the tendencies of the electing body constitute neither a momentary nor an accidental event but rather reflect today’s social structure. Unfortunately, it is now clear that the citizens who look down on the traditional political parties and democracy itself are many more than had been anticipated. This has been taken advantage by far-right and neo-nazi neo-fascist formations, given that political parties like ELAM and Golden Dawn tend to benefit from citizens’ alienation from the structures and processes of democracy, thereby increasing their votes.

Drawing from Greece’s experience with Golden Dawn, as well as from other countries’, it must be taken for granted that ELAM will take utmost advantage of its presence in Parliament, on a financial as well as political level, so as to uphold and further expand its position in the political life and in society. Additionally, it is certain that the presence of its members in Parliament will impede the latter’s proper functioning. Further to this, KISA warns about the danger in relation to the process of finding a solution to the Cypriot issue, given that the increase of nationalistic and racist voices within and outside of Parliament, but also, the likelihood of their participation in the National Council, further endangers the negotiations in regards to the Cypriot issue and the functioning of a reunited Cyprus in the future.

Clearly, the election success of ELAM’s fascists in no way can it disorient regarding their true face and ideology, nor clear their criminal actions against migrants, Turkish-Cypriots and progressive Greek-Cypriots.[2] KISA estimates that ELAM has accessed Parliament, based on the utilization of tolerance and lack of political will on the part of the state and the political parties, almost in their entirety, in relation to the important issue of eliminating nationalism and racism.

The position of the current government, which from the moment of taking up power has been playing a dangerous game of balancing powers, juggling between a culture of peaceful coexistence and nationalism, has benefited the political formations as well as specific politicians, who are distinguished for their nationalistic and racist speech. An indication of this practice constitutes the field of education. For example, this year the Ministry of Education has, in a paradoxical manner, set as goals of the year the cultivation of students’ awareness in relation to racism while, on the other hand, the enhancement of national identity through “lessons from the struggles for Freedom by the Cypriots”.[3]

Additionally and for once more, KISA points out that the model and migration and asylum policies of Cyprus, which have repeatedly constituted the basis of discrimination and racism against migrants and refugees, their alienation and marginalization, could not be seen independently of today’s rise of racist and nationalistic voices. This exact attitudes towards people as second class citizens, on the basis of their ethnic origin but also their bank account, has contributed to a political legitimation of far-right and populist powers as well as to ELAM’S neo-Nazis, who openly and blatantly position themselves against migrants and refugees.

An indicative example of the political tolerance of the state towards nationalism and racism as well as the hostile position against those who reject such ideologies, constitutes the fact that the civil society is being undermined by the government, despite the pre—election pronouncements by the President. During the last three years, non-governmental organisations, who are active in the fields of migrations and asylum but also generally in the protection of human rights, have been systematically excluded from any process of deliberation. The complete lack of willingness for cooperation on the government’s part is expressed primarily through the position of the Minister of the Interior and of Labor and Social Insurance, who, after three years in power, persist to deny carrying out a meeting with the NGOs.

On the basis of all of the recent events mentioned above, KISA calls upon: