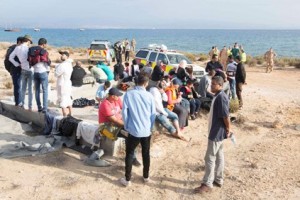 Without any further notice, 114 rescued refugees are still located in the territory of the British Sovereign Bases for the last six days. The refugees were transferred to the Sovereign Bases of Akrotiri last Wednesday, 21 of October 2015, after notification of the presence of two boats carrying refugees off the coast of Akrotiri given by some fishermen.

According to information featuring in the media[i] and based on statements of some of the refugees in the media, the original destination of the refugees was the Greek island of Rhodes. The possibility that their final destination was the British Sovereign Base, so that they could be transported through the Base to Britain, something that is unfortunately repeated by right-wing and xenophobic British media, seems extremely remote.

In the case of this group of refugees, but also of other refugees who arrived in Cyprus in the recent past, the problem lies on the reluctance of these people to apply for international protection as they know that their applications will be examined by the Republic of Cyprus on behalf of the UK. The reluctance of the refugees to seek international protection in Cyprus results from the policy followed by the Republic of Cyprus for for granting subsidiary protection rather than the status of a recognized refugee. The subsidiary protection lags significantly from that of a recognized refugee since the holders of this status are not entitled to family reunification, their travel documents cannot be issued and their status may be revoked at any time. A further reason is the difficulties that the refugees are facing in the country due to the lack of integration policies and the lack of equal participation in the society.

Concerning the handling of the aforementioned refugees by the Sovereign British Base, the Memorandum of Understanding (MoU) signed between the Republic of Cyprus and the United Kingdom (UK) in 2003, indicates the steps that should be followed from the beginning on the part of the Sovereign British Base (SBB). The Memorandum stipulates that the UK has the legal responsibility for the refugees who arrive in the territory of the Sovereign British Bases, but due to their lack of the necessary infrastructure in order to handle such cases, the Republic of Cyprus undertakes the management of such cases like the examination of the asylum applications, the provision of reception conditions such as healthcare, social benefits etc against relevant compensation paid by the UK. This Memorandum also states clearly that in all cases the UK has the ultimate responsibility for those who are recognized as beneficiaries of international protection and it is also responsible for their relocation.

Despite the clear provisions of the Memorandum of Understanding of 2003, Britain has failed to respect them in the past. More specifically, in 2006, when a group of refugees arrived in the territory of the SBB of Dhekelia, the Republic of Cyprus took over the UK’s obligations towards the refugees, but since then, no compensation has been paid to the Republic for the services that it provides. Additionally, the UK has not implemented yet the obligation arising from the MoU concerning the relocation of the refugees, either in the territory of Great Britain or in another country that is willing to accept them.

In light of the above KISA – Action for Equality, Support, Anti-racism calls on the UK to respect both the Memorandum of Understanding of 2003 and its international obligations, ensuring the rights of the refugees who arrived last week in the SBB as well as of other refugees who followed similar route in the past. Furthermore, if the refugees wish to apply for asylum then the authorities of the Republic of Cyprus should ensure the unhindered access of refugees to their rights and at the same time, the Great Britain to pay compensations to the Republic of Cyprus, while assuming responsibility for their relocation.

KISA further condemns the fact that the SBB  has not approved yet the access of humanitarian and other non-governmental organizations in the area where the refugees are located. Besides the humanitarian dimension of the issue, the policy of the SBB conflicts with the right of the refugees to seek legal and other advises.