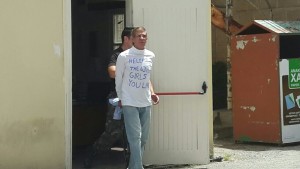 KISA publicly denounces an abuse incident against Mr. Saif El Di Mustafa (E.M.) by the Police, which took place before his transfer to the Nicosia District Court where the hearing of the request of the Egyptian authorities for his extradition is still ongoing. Furthermore, it is noted that the Asylum Service’s recent decision unlawfully excludes Mr. E.M. from the process of granting international protection. KISA, acting on behalf of Mr. E.M., appealed the Asylum Service’s decision before the Refugee Reviewing Authority for the reasons outlined below. It is recalled that Mr. E.M. was the central figure in the hijacking of a passenger plane of Egyptian airlines ended up at Larnaca airport on Tuesday 29/03/2016.

KISA denounces both the abuse of Mr. E.M. by the police and the attempt of “muzzling” his free expression. In particular, before his transfer to the court, Mr. E.M. was wearing a T-shirt with a slogan against the current regime in Egypt. Then, members of the police asked him to change his T-shirt and when he refused, they removed it against his will using excessive force. For this incident, KISA has already made a complaint to the Independent Authority for the Investigation of Allegations and Complaints against the Police.

Furthermore KISA considers unlawful and erroneous the decision of the competent authority to exclude Mr. E.M. from the asylum procedure on the grounds of committing the offense of hijacking, since this decision seems to have been taken on the basis of serving political purposes. KISA bases its position on four reasons suggesting that Mr. E.M. should be granted international protection status, and then to be tried in Cyprus for the offenses he committed:

In the light of all the above, KISA demands: