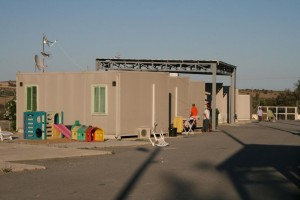 On Wednesday, September 9, 2015 a delegation of KISA visited the Refugee Reception Center in Kofinou. The visit took place following a complaint by KISA to the Ministry of Interior, after the ministry’s initial decision to prevent the unhindered communication between NGO’s and the rescued refugees  that have been relocated in Kofinou from the Kokkinotrimithia camp.

During our visit, we have made several observations that show that, despite the improvements in the living conditions of the refugees in Kofinou, several problems remain, additionally to those refereed in the past, that prevent the refugees from transitioning to a smoother life in the reception center. The most serious of these problems is the lack of an efficient management of the center. The absence of a central management or a coordinating body for the reception center, in combination with the presence of several groups and services in it (such as the Red Cross, the Asylum Center, Civil Defense and the Kofinou Community Welfare Council) that remain uninformed regarding the delineation of their activities, leads to miscommunication between the various groups and services which results in the poor management of the Kofinou reception center.

During our visit we have discovered that several older and current needs of the refugees have not been covered. In particular we have seen that the medical needs of some of the refugees have not been met, such as the medication needed for a pregnant woman; the authorities are aware of her situation and have hold of her prescription. There is also a pressing need for personal hygiene items such us shampoo and shaving items.

In addition to that, the children that have been transferred to the reception center as well as those that have been residing in it for some time don’t have the necessary items for school such, bags and writing materials. We also find it inadmissible that all the children living in the center, have no information regarding the school they will attend this year.

Furthermore, we find the treatment of the refugees by a psychologist by means of personal as well as group care to be of the highest importance. In addition to that, the refugees should receive independent counseling and briefing in the presence of translators and we find it imperative that the government should take care of these pressing needs immediately. Finally, according to relevant information, only about 30 out of the 114 refugees have applied for asylum. This is because the fears of refugees concerning the result of the examination of their asylum applications. It also indicates the problems arising from the asylum system in Cyprus in general.