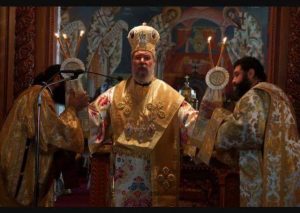 The Archbishop of Cyprus chose Christmas Day, perhaps the most important religious holiday for Orthodox Christians, when churches are crowded with believers, to yet again spread the venom of intolerance and to undermine the bicommunal discussions for a peaceful resolution to the Cyprus problem.

While in his Christmas sermon Pope Francis drew parallels between today’s refugees and Mary and Joseph, “who struggled to find a safe place to stay in Bethlehem” and called on believers to actively show their solidarity and love for them, the Archbishop of Cyprus characterised them as the ultimate “threat to the nation” because they are Muslims and urged the people “to fight it”.

In his Christmas circular, the Archbishop of Cyprus considers that “Muslims are sent to Cyprus by Turkey as so-called refugees with the intention to alter our national and cultural identity” with the danger that “what is described in the book of Exodus will happen”, that is, that “in case of war, they will become one with the enemy”. It is noted that the particular verse of the Old Testament refers to the violations of human rights which the Pharaohs believed they could impose, including killing babies,  so as to, in the event of war, any resistance against exploitation and slavery in ancient Egypt would be rendered impossible.

KISA considers that the Archbishop’s statements, especially his reference to the aforementioned verse from the Old Testament, constitute hate speech and incitement to violation of human rights and violence against Muslims who, apart from being refugees, they also form one third of the citizens of the Republic of Cyprus.

As KISA considers that the above statements violate the relevant laws of Cyprus – against racist and xenophobic speech and incitement to hatred, it has filed a complaint to the Attorney General and the Chief of Police for investigation of offenses committed by the Archbishop, as well as the Ombudswoman in her capacity as the Authority against Racism and Discrimination.

In light of the above, KISA urges (calls on):