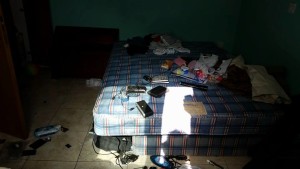 KISA is well known for its critical stance which, among others, includes criticism against certain practices of the police. The result of this stance is that today, it is assumed by many people[i], including the leadership of the police, that we have contributed in a positive manner to the way with which the Cypriot police operates. In this context, and in conjunction to the request as well as questions raised by the compatriots of the Egyptian father concerning the circumstances of his death, and because of the contradictory information which has been provided by the police concerning the incident[ii], KISA is in the process of collecting information in an effort to be able to take a responsible position in regards to  the tragic event.

Based on this effort, the day following the incident (May 22th), we considered it appropriate to go to Oroklini in order to be directly informed  about the conditions under which the Egyptian father was killed. On May 24th, we returned to Oroklini in order to speak with one of the closest neighbours of the family under reference, as the said neighbour could not be contacted during our first visit. At this point, it is worth to be mentioned that our organization has already contacted the wife of the deceased, which we also support in these difficult moments of her life.

During our second visit and as we awaited for the arrival of the aforementioned neighbour, the Executive Director of KISA, in an effort to collect more information and acting spontaneously, entered the apartment where the tragedy had occurred through an open window. The decision to enter the residence was based on the fact that he considered that this act does not violate any rights of personal residence, given that the apartment had been abandoned by the remaining family members. Furthermore , by entering the apartment, it was not considered in any way as an intervention to the work of the police, since there were no warning signs on behalf of the police, which would aim towards the prevention of access in the said appartment.

Based on the above-mentioned facts, KISA categorically denies the information which claims that the members of our organization were  “caught” in the apartment and that our members were arrested by the police. At the same time, we question the intention of this misinformation which was provided to the media by the police as well as  the motives behind this action.

In any case, we want to clarify that KISA will continue to collect information, both for the police’s work and for the handling of the said family by the relevant authorities, as well as in order to be able to take a responsible position in relation to the substance of the case. Our stance will be conducted after a forthcoming meeting with the police, which was arranged after a relevant request by KISA, and which is consistent to our commitment to consult with the police whenever possible, before proceeding with any public complaints and criticism.

[i] For an example, see the relevant police notice following a meeting with members of KISA at: http://goo.gl/vO9gze

[ii] On May 21st, the Cyprus anti-terrorist unit raided an apartment in Oroklini where a father of Egyptian origin  had locked himself in it along  with his 16 month-son and threatened to kill both himself as well as his child  in the case of any violent intervention by the police.  During the operation, the father was fatally shot  and the child was taken to hospital after receiving an injury by  the father. See for example: http://goo.gl/3gIssc