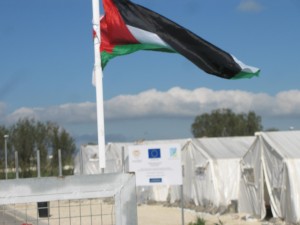 The Ministry of Interior in the attempt to close down the camp in Kokkinotrimithia, where Syrian refugees reside which were rescued last September in open waters of Cyprus, proceeded last Saturday with the withdraw of all state services from the camp (Police, Civil Defense, medical services, cooks etc.). Concurrently, the humanitarian aid and services given especially by the Cyprus Red Cross have been interrupted and have withdrawn too. According to information that KISA got, the indispensible presence of the Red Cross for humanitarian aid has stopped following a request and suggestion of the Ministry of Interior.

However the refugees remain at the camp with absence of presence of the civil defense and the police for reasons to assure administration and protection at the camp, and without provision of living tools such as food and means of transportation, whilst only left with water and electricity supply, which according to a government’s directive will cease at the end of the month.

Vulnerable groups such as children, a child with special needs and people with chronic diseases which are in urgent need of medical care, are in critical conditions. Due to the cease of transportation they have no access to health care centers and hospitals as a result of being exposed to various dangers. Furthermore, for more than four months the minors are deprived from their basic right to education.

KISA considers that the government with its aforementioned decisions condemns the refugees in inhuman, humiliating and degrading treatment in violation of all international obligations and those arising from the European Union. We emphasize that even though they lack of a legal residence status, because of not applying for asylum, the refugees have at least the right to live in decent conditions and have access to health care and education. With its decisions the Cyprus government in practice leaves the Syrians with three choices, – Stay in the camp under current hard living conditions, – Obligate them to apply for asylum although the fact that the republic of Cyprus violates the refugee law by not providing recognized refugee status, – Re-approach, left with no other viable option, for the third time traffickers circuits in order to leave Cyprus and apply for asylum in other European countries once again putting their own life in danger.

Despite the aforementioned government actions the Kokkinotrimithia refugees determinately state to continue their permanence in the camp organizing its self-administration, until they find a way of applying for asylum in another country, since they believe, according with how they lived in the past months in Cyprus, are under yielding that they cannot live with dignity and a future in this country and that is why they insist in not proceeding with asylum applications in Cyprus.

In conclusion we urgently invite the public, restaurants, those related to the food sector, volunteer doctors and teachers to support the refugees with food and things of first need, necessary medical and pharmaceutical equipment and health care as well as educational programs for children, since the government is depriving them from every basic human right.